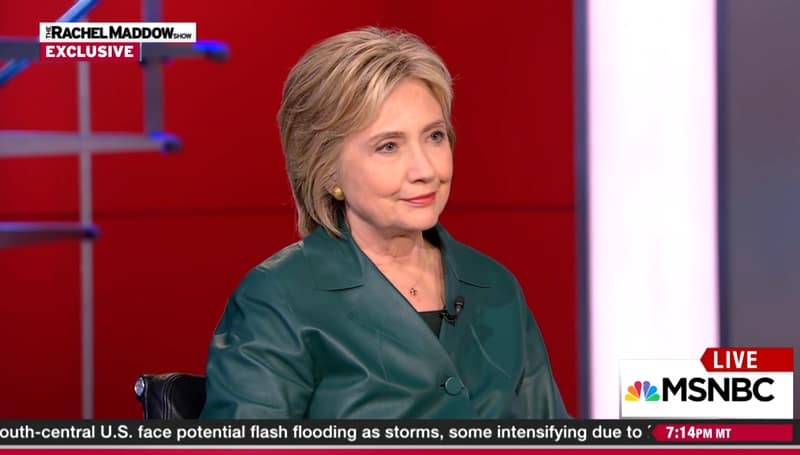 Rachel Maddow sat down with Hillary Clinton last night for her first interview since Thursday’s Benghazi panel. It was also the first time Clinton has given an interview since VP Joe Biden got out of the race. They talked about both of those things, and you’ll find the clips, below, but of interest to this audience is the discussion they had about civil rights, and, in particular, President Bill Clinton’s implementation of the Defense of Marriage Act (DOMA) and ‘Don’t Ask, Don’t Tell’, two issues which, as Maddow points out, have taken “a decade of progressive activism to unwind.”

Asks Maddow in the clip below:

“Whether it was ‘don’t ask, don’t tell’ or the Defense of Marriage Act or the – you know, tough on crime (ph) mandatory sentences.  Former President Clinton is progressive on all those issues now… but the policies that he signed – for politically practical reasons – in the ’90s have taken – you know, the political miracle of Barack Obama’s election and a decade of progressive activism to unwind those things to get back to zero. …And so I know that you and President Clinton are different people, and I know that you’re not responsible for what he did as president.  But is your approach to civil rights issues the same as his, or is it different? “ 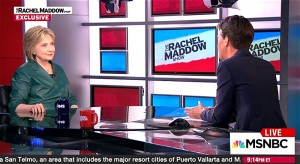 “Well, I want to say a word about the issues you mentioned, because my take on it is slightly different. On Defense of Marriage, I think what my husband believed – and there was certainly evidence to support it – is that there was enough political momentum to amend the Constitution of the United States of America, and that there had to be some way to stop that. And there wasn’t any rational argument – because I was in on some of those discussions, on both ‘don’t ask, don’t tell’ and on DOMA, where both the president, his advisers and occasionally I would – you know, chime in and talk about, ‘you can’t be serious. You can’t be serious.’ But they were.  And so, in a lot of ways, DOMA was a line that was drawn that was to prevent going further.”

“It was a defensive action,” Maddow says.

“It was a defensive action. The culture rapidly changed so that now what was totally anathema to political forces – they have ceded. They no longer are fighting, except on a local level and a rear-guard action. And with the U.S. Supreme Court decision, it’s settled. ‘Don’t ask, don’t tell’ is something that – you know, Bill promised during the ‘92 campaign to let gays serve openly in the military.  And it’s what he intended to do.”

“And then – yeah.  Oh my gosh, it was the most astonishing overreaction, but – by the military, by the Congress.  I – I remember being – you know, on the edge of one of those conversations, and – and so ‘don’t ask, don’t tell,’ again, became a defensive line. So I’m not in any way excusing them.  I’m explaining them.”

“My take on this, now, is we’re gonna have an election that is truly going to be, at bottom, about fundamental rights.  A woman’s right to choose, defending Planned Parenthood, marriage equality, taking on the continuing discrimination against the LGBT community.  You can get married on Saturday, you can get fired on Monday.  Voting rights – the most profound citizenship rights that we have being blocked and undermined at every turn. We are gonna have a very vigorous debate in this election, because the Republicans are all on record as trying to reverse and rip away the progress that has occurred. A lot of it, because of decisions that the court has finally made – both for good and for bad.  I mean, the marriage equality decision for good, the terrible gutting of the Voting Rights Act for bad.  And the local activity in states against a woman’s right to choose and defunding Planned Parenthood.”

Clinton talks about the importance of Democrats winning down-ballot races to counter the power Republicans have amassed in state legislatures and governorships.

Clinton on what she did after the 11-hour Benghazi panel (“drank beer and ate Indian food”) and the importance of investigations:

On Syria and if it could go the way of Libya:

Her support for the no-fly zone over Syria and whether she would shoot down a Russian jet if it violated such a rule:

On the slow progress on veteran’s health care and Republicans trying to undermine the VA to justify privatizing it:

On Sidney Blumenthal, making new friends in the public eye, and whether old friends bring baggage: