Four months after the U.S. Supreme Court’s ruling in Obergefell — and more than a year after it became legal in Oklahoma — opponents of same-sex marriage plan a rally at the state Capitol on Sunday. 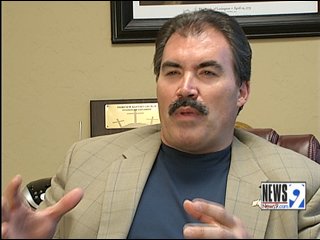 The “Protect Life and Marriage Rally” is being organized by the Rev. Paul Blair (right), president of Reclaiming America for Christ, who once compared opposition to same-sex marriage to struggles against Nazi Germany and slavery.

“This is to remind people that we are not 320 million individuals ruled by five non-elected attorneys on the Supreme Court,” he said. “We are a union of sovereign states who delegated few and defined powers to the federal government in order to handle the general welfare.”

Blair said it’s important to note that in 2004, Oklahoma voters overwhelmingly approved a state constitutional question banning same-sex marriage and recognition of same-sex marriages performed in other states. He said Oklahoma is not the only state that approved such a ban before the U.S. Supreme Court’s ruling in June that same-sex marriage has 14th Amendment protection, making it a national right.

Join thousands of fellow Oklahomans on the south side of the Capitol on Sunday, October 25 at 4:00 p.m. for a rally to Protect Life and Marriage in Oklahoma. Congressman Jim Bridenstine, Representative Dan Fisher, Pastor Kevin Clarkson and Pastor Blake Gideon will be among those speaking.

“I think the folks that are saying that are grasping at straws. This is the United States of America and our constitution is the law of the land. It is the job of the U.S. Supreme Court to interpret that law,” Stevenson said.

“It is literally a bunch of people hearkening back to the days of (Alabama Gov.) George Wallace, and history will remember them that way.”

For more on Blair, check out Right Wing Watch.