Over the weekend we reported on Carlo Maria Viganò, the current Apostolic Nuncio leading the Holy See’s diplomatic mission to the U.S., whom the Vatican identified as being responsible for the Pope’s meeting with Kim Davis. 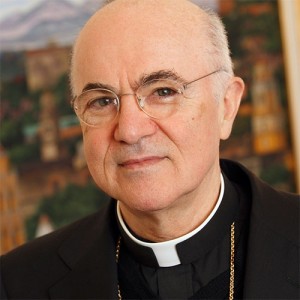 Viganò, who was named to his position by Pope Benedict, is a cultural warrior, who’s shows up at anti-abortion rallies, and attended the most recent NOM ‘March for Marriage’ in Washington D.C.

Inviting Kim Davis to a reception with Pope Francis undermined the pope’s message to the United States and was a mean-spirited insult to the Kentucky couples whose marriage licenses she has tried to deny. For the good of the church, please resign immediately and allow Pope Francis to appoint a new apostolic nuncio.

Faithful America is “the largest and fastest-growing online community of Christians putting faith into action for social justice” according to its website.

But Viganò’s fate may already be sealed. Wrote The New York Times over the weekend:

The question now is did Archbishop Viganò, left to linger in the United States as a new administration has taken power in Rome, keep Pope Francis in the dark or simply underestimate the off-message media storm that a meeting with Ms. Davis would provoke. Or, after executing orders from Rome, has he once again found himself being hung out to dry at the end of his career. In January, Archbishop Viganò will turn 75, the age at which bishops must submit a formal request to the Vatican for permission to resign. These requests are not automatically accepted, and bishops often stay in their appointments long after. It seems unlikely, church analysts say, that Archbishop Viganò will be one of them.

Previous Post: « Candace Cameron Bure Shames Danny Pintauro On His Past Drug Use, HIV Status: WATCH
Next Post: Ellen Page: ‘I Acutely Remember the Pain I Was In Before I Was Out’ — WATCH »