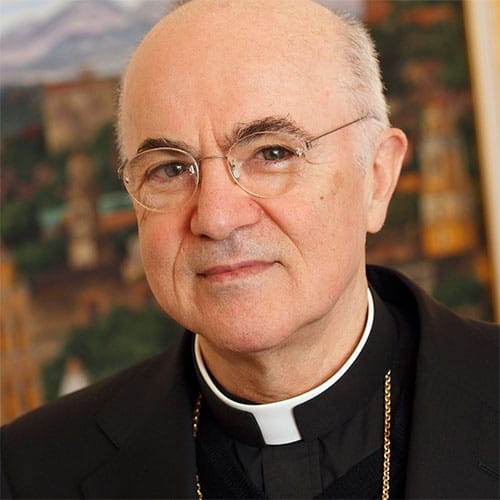 Earlier this week, while the Kim Davis – Pope Francis drama was well underway, questions began to be asked about who set up the meeting between the religious right’s cultural warrior and marriage martyr and the Pontiff.

Early on fingers were pointed at Carlo Maria Viganò, the current Apostolic Nuncio leading the Holy See’s diplomatic mission to the U.S.. Lawrence O’Donnell discussed it with Washington Post reporter EJ Dionne in a video posted to this site on Wednesday.

The Vatican confirmed that on Friday and appeared to be blaming him for shoving Davis into the Pope’s orbit while Davis’s Liberty Counsel lawyer Mat Staver insists that the invitation came from the Pope and that “somebody is trying to throw [Viganò] under the bus.”

Viganò, who was named to his position by Pope Benedict, is a cultural warrior himself, often showing up at anti-abortion rallies, as well as the National Organization for Marriage’s (NOM) March for Marriage, where he spoke with other anti-LGBT leaders, including Staver.

The NYT adds that the two became chums at the event:

Mr. Staver said a conservative deacon, Keith Fournier, introduced him to Archbishop Viganò back in April before speaking at a National Organization for Marriage rally on the Washington Mall in opposition to same-sex marriage. As Mr. Staver descended from the stage, Archbishop Viganò made a point to “thank me for my message,” the lawyer said.

And wonders about Viganò’s future with the Church:

The question now is did Archbishop Viganò, left to linger in the United States as a new administration has taken power in Rome, keep Pope Francis in the dark or simply underestimate the off-message media storm that a meeting with Ms. Davis would provoke. Or, after executing orders from Rome, has he once again found himself being hung out to dry at the end of his career. In January, Archbishop Viganò will turn 75, the age at which bishops must submit a formal request to the Vatican for permission to resign. These requests are not automatically accepted, and bishops often stay in their appointments long after. It seems unlikely, church analysts say, that Archbishop Viganò will be one of them.