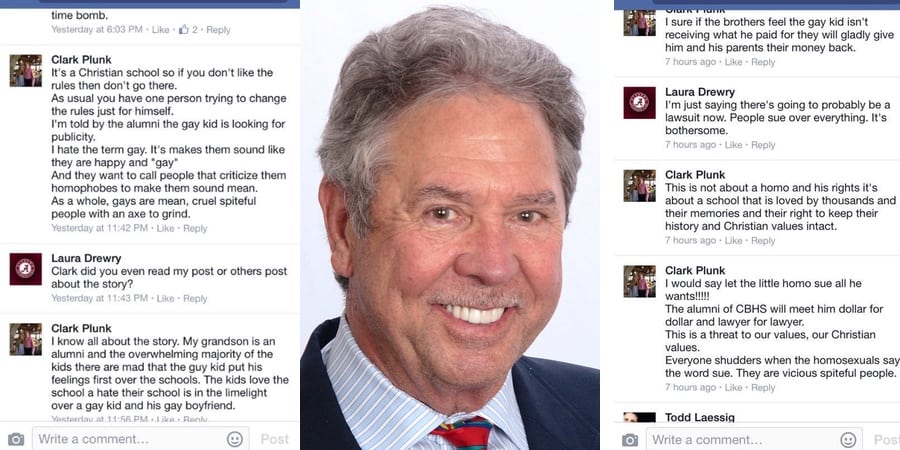 Over the past week, Towleroad has reported on Lance Sanderson, a gay student at Christian Brothers High School in Memphis, Tennessee, who was denied when he asked to bring a male date to the Homecoming dance. After he discussed his situation on Facebook and it began to make national headlines, the school suspended Sanderson when he arrived to class the following week.

Clark Plunk (above), a Lakeland, Tennessee Commissioner, attacked Sanderson and the gay community in a Facebook post this week.

“It’s a Christian school so i you don’t like the rules don’t go there. As usual you have one person trying to change the rules just for himself. I’m told by the alumni the gay kid is looking for publicity. I hate the term gay. It makes them sound like they are happy and “Gay” And they want to call people that criticize them homophobes to make them sound mean. As a whole, gays are mean, cruel spiteful people with an axe to grind.”

“The kids love the school a hate their school is in the limelight over a gay kid and his gay boyfriend….This is not about a homo and his rights it’s about a school that is loved by thousands and their memories and their right to keep their history and Christian values intact.”

“I would say let the little homo sue all he wants. The alumni of CBHS will meet him dollar for dollar and lawyer for lawyer. This is a threat to our values, our Christian values. Everyone shudders when the homosexuals say the word sue. They are vicious spiteful people.” 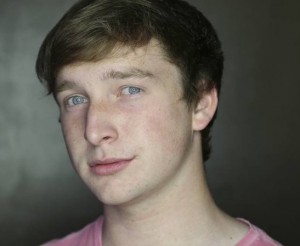 Sanderson responded to hurtful remarks he has received on Facebook:

I have been shown a few intolerant comments that were made against myself and other LGBT people. I have nothing but forgiveness for the people who wrote or agree with these comments. I recognize that we all have different beliefs and were taught from varying viewpoints. I hope that individuals and the community as a whole will use this as an opportunity to learn about other people’s beliefs. I know that through education and acceptance, we will move forward as a stronger community.

Said Will Batts, the Executive Director of Memphis Gay and Lesbian Community Center, to WMC:

“So it’s one thing to attack an 18-year-old high school student. That’s a problem in and of itself. But the comments themselves are talking about all of us. All of us in the LGBT community. He has people in his community that are LGBT. People that he serves, pay his salary, and he’s making these hurtful, just dangerous comments,” Batts said. “Because we know there are plenty of studies that show that this type of speech is what causes harm to young people.”

Plunk says he stands by what he says:

“You know I said what I said. I stand by what I said and I was standing up for my faith and I still stand up for my faith. What I said, it was personal. It was on Facebook. It was supposed to be just a group of us talking about the situation at Christian Brothers.”

Previous Post: « Anti-Gay Oregon Bakers Defy Order To Pay $135K To Lesbian Couple After Losing Lawsuit
Next Post: Lawrence O’Donnell Digs Into Who Set Up the Secret Meeting Between Kim Davis and the Pope: VIDEO »