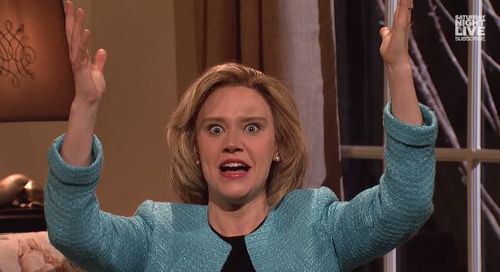 Hillary Clinton reportedly turned down the chance to give the keynote address at this Saturday’s Human Rights Campaign gala in Washington D.C. for the opportunity to appear on Saturday Night Live, the NYT reports:

In a top-secret appearance that her campaign would not confirm, Mrs. Clinton will meet her comedic counterpart, Kate McKinnon, who has portrayed the former first lady to effusive praise as the latest “S.N.L.” member to don a blonde wig and attempt to bring to life the character of Mrs. Clinton.

In order to appear, Mrs. Clinton turned down the chance to give the keynote address to the influential Human Rights Campaign, the country’s most powerful lesbian and gay rights group, which will allow her to make the debut “S.N.L.” appearance of her 2016 campaign, said several people with knowledge of her schedule who could not discuss private planning for attribution.

Clinton will appear at an HRC grassroots leaders event earlier on Saturday, as we reported last week.

Joe Biden will deliver the keynote address on Saturday for HRC, and Apple CEO Tim Cook is receiving a Visibility Award, the organization announced yesterday.

Watch McKinnon as Clinton below: