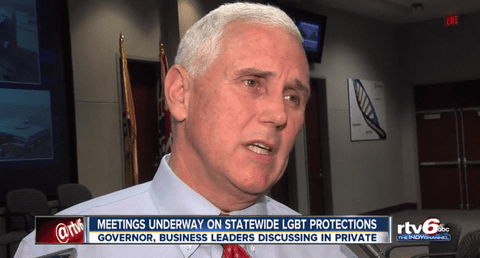 Indiana Governor Mike Pence (R) is reportedly considering a “Utah compromise” on LGBT rights in an attempt to appease those angered by the state’s anti-gay Religious Freedom Restoration Act (RFRA) which he signed into law in March.

The notion of a “Utah compromise” refers to an agreement reached in the Beehive State that ultimately provided non-discrimination protections to LGBT citizens in the areas of housing and employment but not public accommodations–a compromise many activists found unpalatable. As The Courier-Journal notes, public accommodations is “a broad legal term used to describe everything from bus services to restaurants and other private businesses”:

Public accommodations include any business or service open to the public. In the civil rights movement of the 1950s and 1960s, some of the most well-known examples of discrimination in public accommodations centered on water fountains, bathrooms, buses and seats at the lunch counter.

But today, the battleground is wedding services. Should a business owner, who follows a religion that disapproves of gay marriage, have to serve gay customers who request wedding cakes or photographs?

Legislation modeled after the Utah law, he said, would be “completely unpalatable to me.” And lawmakers, he added, would be naive to think those weaker laws would be enough to repair the state’s battered reputation.

He, and others including Eli Lilly & Co. and the NCAA, say they want stronger protections of LGBT rights than the Utah compromise afforded — including in businesses open to the public.

Bob Williams, senior vice president of communications for the NCAA commented, “RFRA got tied up with gay rights in the wrong way,” Wilson said. “The way you come back from that is to do more for that community.”

Watch a news report from RTV 6 News below: