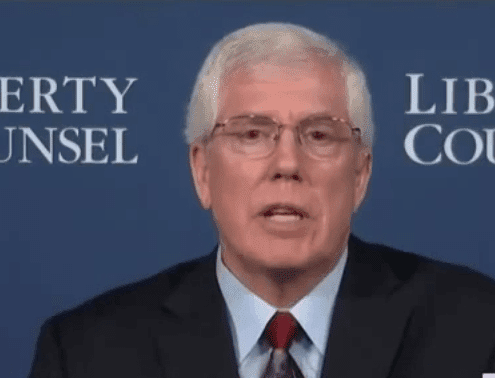 In an email to members yesterday, Mat Staver, the head of tax exempt “church auxiliary” anti-gay litigation group Liberty Counsel shilled for cash – and of course prayer – to fight the persecution of American Christians.

Staver was reacting to last week’s announcement that the Department of Justice (DOJ) is creating a new position for a Domestic Terrorism Counsel to fight homegrown extremism.

Predictably, those very same bigots have since voiced concern that the government is now hell-bent on persecuting Christians.

The email continues in part:

“A dangerous new chapter in the persecution of Christians is underway. No, not in the Middle East, but shockingly, right here in the United States!

“Last week, we learned through CNSNews.com that President Obama’s assistant attorney general for national security, John Carlin, revealed that the Department of Justice (DOJ) is creating a new position called the ‘Domestic Terrorism Counsel,’ to combat the ‘real and present threat’ of domestic terrorism…

“…in the opinion of President Barack Obama and his administration, you and I are considered more dangerous than radical jihadists and ISIS operatives which the State Department admits are being actively recruited in the United States.

“Mentored by radicals, including Bill Ayers, President Obama embraces ideologies that conflict with Christian values and the very principles upon which our nation was founded. That’s why we are now in the Obama administration’s crosshairs.

“…we can no longer ignore the increasing legislative and legal efforts to discredit and demonize our faith. This latest announcement should drive all of us to reinforce the walls for a battle that is already well underway!

“Your generosity is needed more than ever — both in prayer and through financial support. We are facing well-funded adversaries who are being emboldened by the President and his administration — and we must rise to the challenges!”

“Your special gift,” he concludes, “will encourage us and help us overcome a significant budget shortfall this month.”