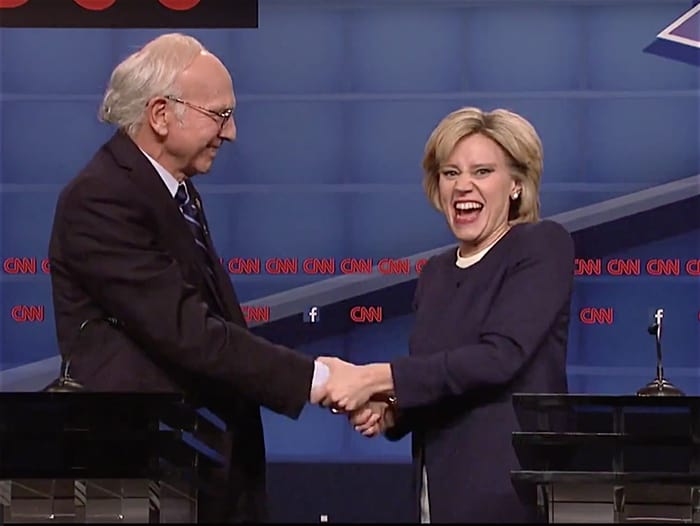 This week’s Democratic presidential debate was front and center in Saturday Night Live‘s cold open and brought with it a couple of surprise guests.

Alec Baldwin hit the stage as Jim Webb: “I’m Jim Webb and It’s about damn time I get to talk. What has it been, a thousand years? Here’s the deal. I fought in Vietnam and I’m not going to brag about how much ass I kicked, but let’s just say I kicked every single ass.”

But the real treat at the podiums were “the real candidates” – Kate McKinnon at her scalding best, and Larry David as Bernie Sanders:

“I’m gonna dial it right up to a ten… we need a revolution! We’ve got millions of people in the streets. We gotta do something and we gotta do it now!”

Shortly thereafter Sanders/David was asked his position on regulating Wall Street and the big banks.

“Why do they chain all their pens to the desks? Who’s trying to steal a pen from a bank?”

They also got into the emails. Sanders/David replied:

“What’s the deal with emails anyway? I forgot my password the other day, so they say, we’ll email you a new one, but I can’t get into my email to get the password. Talk about a ballbuster?”

And Clinton/McKinnon was a bit surprised by the reactions Bernie was getting:

“Wait a minute do you all like this? I’m not losing am I? Well in 2008 of course I lost. I was running against a cool black guy. But I thought this time I got to be the cool black guy?”