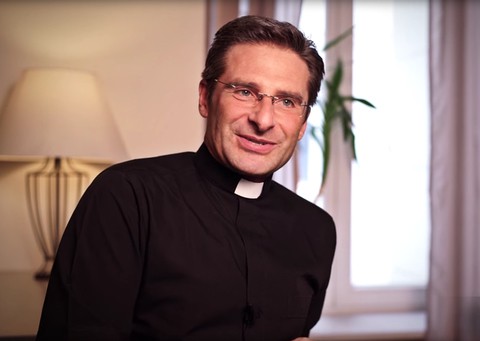 Krzysztof Charamsa, the Polish priest who held a top position in the Vatican and was fired after coming out publicly earlier this month, has now been defrocked by a Bishop in his home country of Poland. According to a statement released by the Bishop, the defrocking has to do with Charamsa’s breaking his vow of chastity–presumably with his Catalan boyfriend Eduardo. Charamsa previously stated that he had not broken his vow of chastity because he “never touched a woman.” 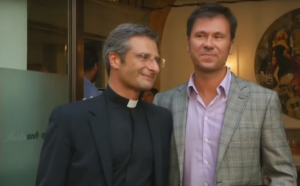 Bishop Ryszard Kasyna has decided that Krzystof Charamsa should no longer be able to celebrate mass, administer sacraments like communion and baptism or wear a cassock, according to a statement on the website of their northern Pelplin diocese. […]

“Considering Father Charamsa’s lack of will to correct his behaviour and public statements indicating he will continue to break rules governing the behaviour of Catholic priests,” the bishop decided to defrock him, the statement said.

“This penalty is intended to encourage Father Charamsa to mend his ways and can be rescinded depending on his behaviour,” it said.

Charamsa has not been excommunicated from the church, which would mean all-out banishment.

Charamsa’s coming out was a particular source of rage for Vatican officials because it came on the eve of the church’s Synod on the Family which addresses, among other issues, official attitudes towards the LGBT community.

In coming out, Charamsa said he hoped to change the church’s view of LGBT people:

“It seems to me that in the Church we are ignorant about homosexuality because we don’t really know any homosexuals. We have them all around us, of course, but we never look them in the eye, because they seldom say who they are. I hope that my personal experience will help stir the Church’s consciousness in some way. I will personally reveal my identity to the Holy Father in a letter. And I will tell the universities in Rome where I teach who I am; to my great sorrow I will probably no longer be allowed to work in Catholic education”.

Watch a news report on Charamsa’s coming out below: