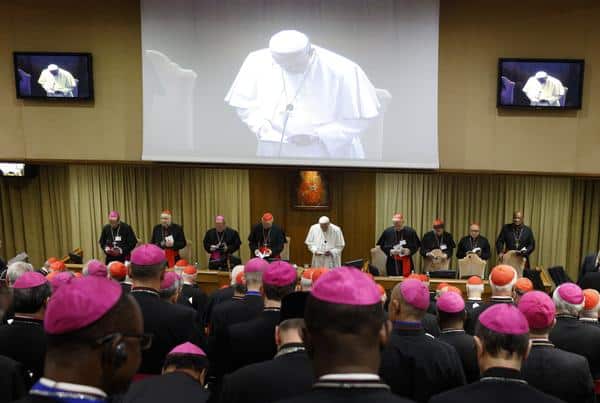 Just a day after referring to gay marriage as a “passing fad” at the opening of the Catholic Church’s synod on the family, Pope Francis today told assembled clergymen that the Church must “move forward” beyond the many controversies surrounding homosexuality that the Church has become embroiled in.

The seemingly contradictory remarks are on par for the Pope’s at-times baffling record on LGBT issues. While many continue to wonder where this pontiff stands on gay issues, one thing is certain: a dramatic change in Church doctrine on homosexuality is unlikely. However, Pope Francis continues to use language that suggests a desire for progress (albeit incremental) on LGBT issues. Whether such rhetoric is all a PR game of pinkwashing is unclear.

Saying the Church was “not a museum to keep or preserve”, the Argentinian pontiff urged clerics debating a series of thorny social and religious issues in a synod to do so in a spirit of “solidarity, courage and humility”.

“It (the synod) is a place where the holy people of God move forward,” he told the first working session of a three-week gathering that will pit conservatives and reformers against each other over issues including communion for remarried divorcees and cohabitation, as well as attitudes to gay believers.

The pope’s comments echoed his words on Sunday when he said the Church must have “its doors open to welcome all those who knock” and not “point the finger in judgement” of others.

“What’s new now is a sense, however exaggerated, that movement might actually be possible. That’s elicited strong passions both from those who see such movement as desirable, and those who view it as alarming.”