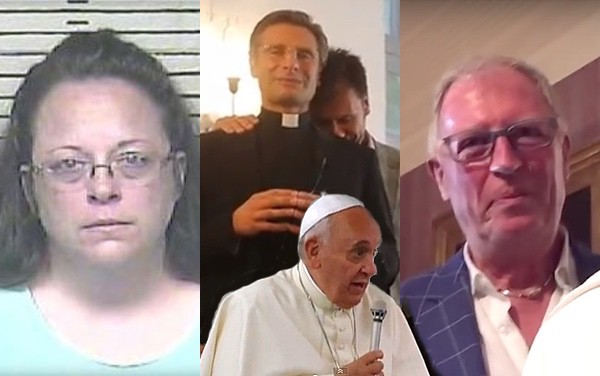 Pope Francis opened the Catholic Church’s synod on the family yesterday in Rome following a week in which an alleged meeting with Rowan County, Kentucky Clerk Kim Davis thrust Pope Francis and the Vatican headlong into the gay rights debate in the U.S..

And the alleged Kim Davis meeting itself is likely more than the Holy See ever cared to involve itself with, but the week was capped by news that Pope Francis had met his former pupil Yayo Grassi, a gay man, and his partner at the Vatican Embassy in Washington D.C., news that broke because Grassi was upset over the response to the Davis debacle and wanted to clear the Pope’s name.

And there was more. Monsignor Krzysztof Charamsa, a Polish priest and theologian working in the Vatican, was promptly fired after he came out as gay in one of Italy’s largest newspapers, Milan’s Corriere Della Sera, and took the Church to task for its positions on homosexuality, saying it should be more open to gay people.

So, that week set the stage for the Catholic Church synod, where homosexuality, divorce, and non-traditional family arrangements are often discussed and debated. Here’s how Pope Francis has been dealing with it, according to ABC News Australia:

At the opening synod mass on Sunday, the Pope had offered encouragement to both camps, defending marriage and heterosexual couples but also insisting the Church must have “its doors open to welcome all those who knock”. In an apparent boost to those who would have priests take a more merciful and inclusive approach to homosexuals, he said the Church must not “point the finger in judgement” of others, because doing so would “betray its mission”.

But he has also said traditional marriage between heterosexual couples should be defended.

“The emotional intensity of the synod is amped up because of perceptions that the Pope’s position is still a work in progress”, Vatican watcher John Allen wrote on Cruxnow, a news website dedicated to the Catholic community.

“Whenever topics such as homosexuality and divorce are on the docket, feelings will run strong.

“What’s new now is a sense, however exaggerated, that movement might actually be possible.

God’s plan for creation, the pope said Sunday, is “fulfilled in the loving union between a man and a woman, rejoicing in their shared journey.” He exhorted the faithful to overcome “every form of individualism and legalism” that conceals a fear of accepting the “true meaning of the couple and of human sexuality,” a reminder that the synod’s main focus remains the traditional family. He said the church’s mission should not be swayed by “passing fads or popular opinions.”