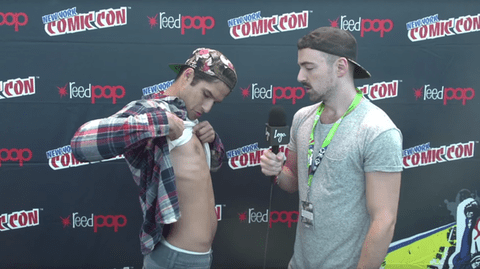 New York Comic Con took place last weekend and among the attendees was the cast of the MTV show Teen Wolf. Long known for embracing queer characters and storylines, the show has a legion of LGBT fans. But, do Teen Wolf’s stars know what a “wolf” is in gay slang? Logo TV’s Matteo Lane interviewed the cast on the red carpet to find out.

Tyler Posey was at a loss, but decided to show off his nipples (which are hairy) in an attempt to show that he qualifies as a “wolf.”

Co-star Dylan Sprayberry chimed in: “A guy with big teeth?” That response made Lane chortle: “I should find the council of gays and tell them that.”

See if any other of the Teen Wolfs know what a gay wolf is, below:

Previous Post: « NEW MUSIC: Dilly Dally, The Enemy, Shopping, Swim Deep
Next Post: ‘If You Could Be Straight, Would You?’ – WATCH »