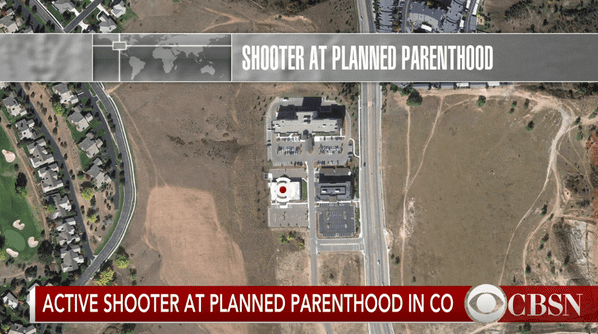 An active shooter has been reported as opening fire near a Planned Parenthood center in Colorado Springs, Colorado. Reports suggest that the shooter has taken hostages. After continuing to hear shots fired with hostages inside a building, police reportedly forced their way inside. It’s not clear if those hostages were taken inside the Planned Parenthood center itself or another nearby building. At least 3 police officers have been injured so far.

At least three police officers have been injured in an ongoing active shooter situation at or near a Colorado Springs branch of Planned Parenthood on Friday afternoon.

Lt. Catherine Buckley, a Colorado Springs police spokeswoman, said she was still trying to confirm other details in the fluid situation.

“We still have a gunman that is out there,” she said.

“The area is NOT secure,” police said in a tweet.

“We were looking out the window and we had an officer wave us back inside,” said Brigitte Wolfe, who works Jun Japanese Restaurant next door. “They have everything blocked off.”

Wolfe said there are roughly a dozen police vehicles at the scene. She said officers have guns drawn and are facing the Planned Parenthood branch.

A photo from the scene showed officers in the area hiding behind their vehicles with their weapons drawn. SWAT officers have been called to the scene.

View photos from the scene below:

And tweets from reporters, some on the scene:

This man said his sister is trapped inside @PPRockyMountain clinic after gunman attacked. pic.twitter.com/nRlvORkQCr

Folks, activity happening. I'm not tweeting it for security reasons.

Cont: Officers in the Planned Parenthood building have encountered the suspect and are engaging in gunfire now. #CentennialBlshooting

As of 1:45 PM PST 4 police officers have been injured along with 1 civilian.