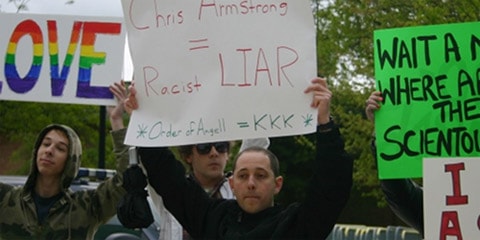 The U.S. Supreme Court on Monday rejected an appeal from Andrew Shirvell, a former Michigan assistant attorney general who was ordered to pay $4.5 million in a defamation lawsuit to gay former University of Michigan student body president Chris Armstrong. Shirvell has been fighting the ruling for years.

In 2010 the Michigan attorney general’s office fired Shirvell for waging a homophobic personal campaign against Armstrong. In addition to harassing Armstrong at public demonstrations on campus, Shirvell ran a blog called the Chris Armstrong Watch which accused Armstrong of being a Nazi as well as a recruiter for ‘the cult that is homosexuality.’

Shirvell claimed that because his harassment of Armstrong took place outside the attorney general’s office, his actions were protected by the First Amendment. Courts thought otherwise, though a federal appeals court reduced the amount Shirvell was ordered to pay by $1 million, at the same time rejecting his request for a new trial.