The conversation began with a listener question about the Real Housewives of Potomac, Bravo’s new entry in that franchise.

Cohen tells the panel that the show does not involve politics, though he can think of a politician he’d like to have involved: “I’d like to get Michele Bachmann on a Real Housewives show. She’s kind of perfect.”

Quips Maher: “And I bet you’d like to meet her husband.”

“Actually, I bet he’d like to meet me,” Andy snaps back.

Maher then turns the discussion to Charlie Sheen coming out as HIV positive, noting “this is serious” and asks Cohen what he thinks about it. 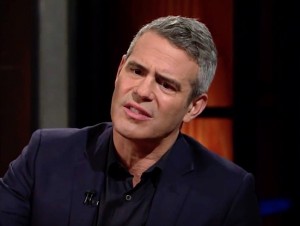 “Before he came out and said I have HIV [this week] it felt like the ’80s where there was this HIV shame going around. And then that it turned out that he was coming out because he had been blackmailed….On the TODAY show I found it a little irresponsible that he was on with his doctor who was…guiding him through having unprotected sex with these high risk individuals and it just seemed to me like he had an opportunity to say something or do something and the message was very murky. I left feeling very confused.”

“I obviously wish him great health but it was upsetting and then to find out that he claimed, ‘oh I’ve told everyone that I’ve been with that this is my status’ but then all these women came out and said ‘no, he never told me’. It just got very messy very quickly.”

“You tell me,” Cohen says to Maher as silence falls over the panel.

Gavin Newsom, who has found himself awkwardly sitting between the two of them, interjects, “I just wonder why the hell I’m sitting here.”