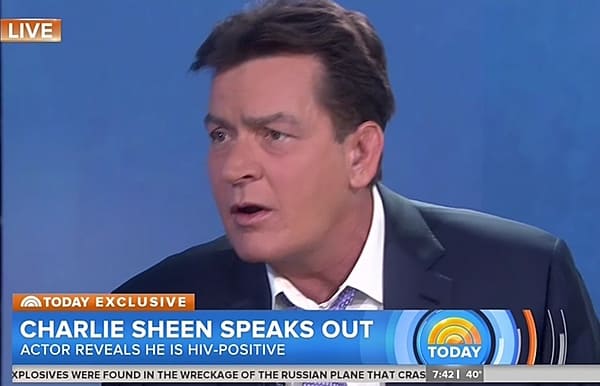 Actor Charlie Sheen sat down with Matt Lauer on the TODAY show this morning and told Lauer, “I’m here to admit that I am in fact HIV positive. And I have to put a stop to this onslaught, this barrage of attacks and of sub truths and very harmful and mercurial stories that are threatening the health of so many others that couldn’t be farther from the truth.”

Sheen told Lauer he was diagnosed four years ago: “It’s a hard three letters to absorb.”

He has paid people millions of  dollars to keep them silent.

“I paid those people, enough to where it has depleted…What people forget is that’s money they’ve taken from my children. They think it’s just me,” he added.

“I trusted them. They were deep in my inner circle. I chose the companionship of insipid types,” he said. “I always led with condoms and honesty…Sadly my truth became their treason.”

“I was doing a lot of drugs. I was drinking too much. I was making really bad decisions.”

Sheen said it is “impossible” that he has transmitted the virus to anyone else. He has had unprotected sex but “they were warned ahead of time” and under the care of his doctor.

Sheen’s “tiger blood” period was more of a roid rage and not a reaction to his diagnosis, he said.

“I don’t” [feel the stigma of HIV anymore], he added. “I have a responsibility to better myself and to help a lot of people. ‘

Sheen returned to the show after the first segment accompanied by his doctor.

Sheen told Lauer he is relieved after making the announcement: “More than I thought possible.”

He was put on strong anti-viral drugs following his diagnosis which have suppressed the virus to the point where he is absolutely healthy, the doctor noted.

The doctor’s worry is substance abuse and depression. Sheen said he is still drinking.

“We’re petrified about Charlie,” the doctor said. “We’re very anxious that he could forget the pills.”

Lauer noted the online speculation and discussion that Sheen “has AIDS.”

“Charlie does not have AIDS. He is healthy,” said the doctor. “Individuals who are optimally treated. It is an incredibly low chance to transmit the virus.”

Sheen said his financial situation is “not great” and he has paid out more than 10 million dollars to people extorting him over his HIV status.

“I told my oldest daughter the other night,” Sheen said. Sheen said Denise Richards and his other ex-wife have known about his diagnosis for a while. He said he “absolutely” called them the moment he found out his diagnosis and told them.

Sheen said that he is tired of the rumors circulating online, particularly, “That I knew I had AIDS and I was intentionally spreading it.”

He said that nobody has sued him for health reasons.

“I’m not here to be the poster man for this but I will not shun away from opportunities [to discuss it].”