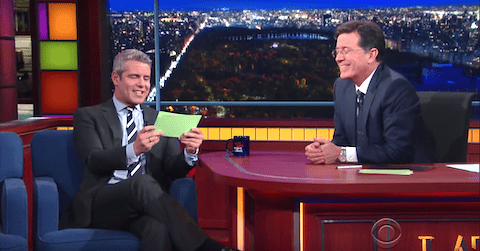 Andy Cohen appeared on The Late Show with Stephen Colbert, to promote his book The Andy Cohen Diaries‘ arrival in paperback, but instead of reading from his new book, Colbert provided old camp letters Cohen wrote to his parents when he was a young boy.

As Cohen reads his letters, his affinity for campy televison drama becomes clear, especially as he reads a letter where he reprimands his parents for revealing “private” information about another camper’s homesickness.

Watch as Cohen takes a dramatic trip down memory lane with his old camp letters, below: