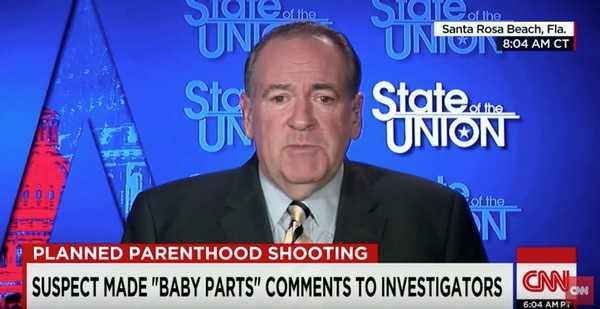 GOP presidential candidate Mike Huckabee called the shooting of a Planned Parenthood clinic on Friday an act of “domestic terrorism” but said that rhetoric from anti-abortion advocates is not to blame.

“I think that’s a little bit disingenuous on the part of Planned Parenthood to blame people, who have a strong philosophical disagreement with the dismembering of human babies and with the selling of body parts, to say that we would like to retaliate by sending some mad man into a clinic to kill people.”

The Planned Parenthood terrorist, identified as Robert Lewis Dear, reportedly told police “no more baby parts” after he was taken into custody.

Watch (most of) the clip:

“First, it is not alleged. Planned Parenthood acknowledged several weeks ago they would no longer take compensation for body parts, which sounds like an admission they were doing so….This is so typical of the left to immediately demonize the messenger, because they don’t agree with the message. What I would say to anyone who tries to link this terrible tragedy to anyone who opposes abortion or opposes the sale of body parts is, this is typical left-wing tactics.”

“We’ve seen an alarming increase in hateful rhetoric and smear campaigns against abortion providers and patients over the last few months. That environment breeds acts of violence. Americans reject the hatred and vitriol that fueled this tragedy. We do not accept this environment as normal. We should not have to live in a world where accessing health care includes safe rooms and bullet proof glass.”