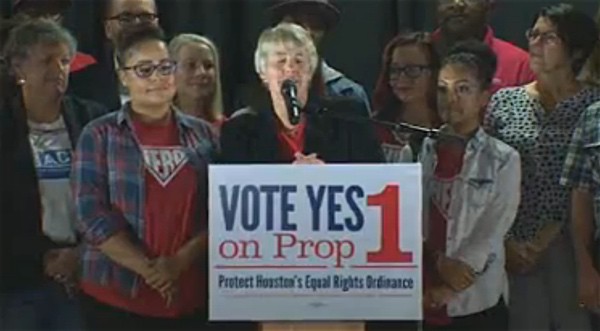 Houston Mayor Annise Parker blasted the defeat of the Houston Equal Rights Ordinance, which was fueled by a right-wing campaign branding it “the bathroom ordinance” and scared voters by claiming it would allow sexual predators into women’s restrooms, and endangered the lives of children. 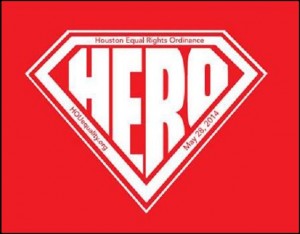 Said Parker, who pledged $50,000 in matching donations to the ordinance:

“I’ve been an activist for more than 40 year. I have stood here in Houston four times when people were given the opportunity to vote on my rights. no one’s rights should be subject to a popular vote.”

“It is insulting it is demeaning and it is just wrong. This was a campaign of fearmongering and deliberate lies. This isn’t misinformation, this is a calculated campaign of lies designed to demonize a little understood minority and to use that to take down an ordinance that 200 other cities across America and 17 states have successfully passed and operated under. They just kept spewing an ugly wad of lies from our TV screens and from pulpits. This was a calculated campaign by a very small but determined group of right-wing ideologues and the religionist right and they know only how to destroy. Not how to build up.”

Parker said that transgender people will not and should never be sacrificed to win a campaign:

“It was clear when we passed the ordinance in council that if we had agreed and said ‘oh yeah, we’ll take the words gender identity out of the ordinance’ that they would have gone away. That would have been wrong then and it would be wrong now and it will be wrong in the future.”

And she blasted the bigots again:

“This is about a small group of people who want to preserve their ability to discriminate and they’re willing to hurt all of those groups that would have been protected by this ordinance to do that.”

Previous Post: « One Confirmed Killer And A Visit From Beyond The Grave On ‘Scream Queens’ [RECAP]
Next Post: Last Sumatran Rhino in Western Hemisphere Relocates to Southeast Asia »