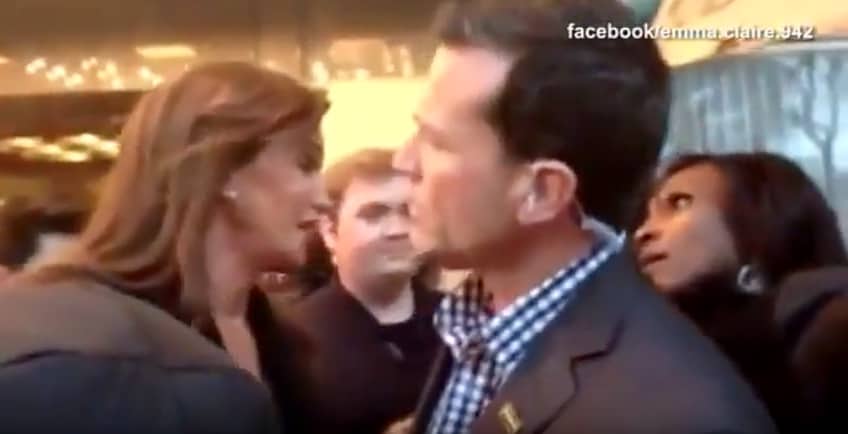 Caitlyn Jenner confronted protesters who were attacking her outside a keynote speech she gave at a luncheon for 1000 people at the Hilton Chicago on Thursday for Chicago House.

Chicago House describes itself as “the Midwest’s oldest provider of housing for those impacted by HIV/AIDS and/or LGBTQ marginalization” and “home to the nation’s most comprehensive social service and support programs for transgender individuals, the TransLife Center.”

The Chicago House’s Speaker Series is an annual fundraising event. Jenner was asked to discuss her coming out experience as a transgender woman.

When Jenner emerged from the event she got an earful from protesters gathered at the entrance, unhappy that Jenner had been asked to represent the trans community. Jenner had a brief exchange with activist Monica James.

“Make the services and make this movement and this plea for trans tolerance intentional and direct for the people who are facing the violence every day on the streets, the people who are being discriminated against on the basis of their gender and their race at the same time,” said Monica James, 43, of Englewood, who held a sign that read, “Liberation not miss-representation.”

“She can’t speak to those struggles,” James said. “It defaces the real truth behind transitioning.”

…When Jenner left the hotel, she stopped to talk briefly with James while ignoring the people who crowded around her trying to take selfies. James said she was a community activist and could not find a job because of her gender and race.

“I would love to see you have a job,” Jenner told James. “I love you.”

Activists had organized the protest via Facebook, on a page now taken down, writing:

“Who, you may ask, did they select to speak on the issues facing trans people and especially trans women in our city? Caitlyn Jenner. Caitlyn Jenner, who lives in a mansion and has a net worth of millions of dollars, while the average trans person has a 41 percent chance of experienceing homelessness [sic] and a nearly 50 percent chance of living off less than $10k per year.

Caitlyn Jenner, who said in a segment on her hit new reality TV series I Am Cait, regarding people who rely on social services to get by: ‘You don’t want people to get totally dependent on it. That’s when they get into trouble. ‘Why should I work? You know, I’ve got a few bucks, I’ve got my room paid for.”

If you think Chicago House’s shameless pandering to the trans community for mediocre representation, embodied by a clueless rich white woman who thinks disenfranchised trans women of color should just pluck themselves up off the street and stop being so lazy, is an insult and a disgrace, DO SOMETHING ABOUT IT! Meet us in the lobby Thursday to tell Chicago House, Caitlyn Jenner, and all her supporters that Caitlyn Jenner doesn’t represent trans people! Stand up and say: #IAintCait!”

Watch another report on the protest with more footage: