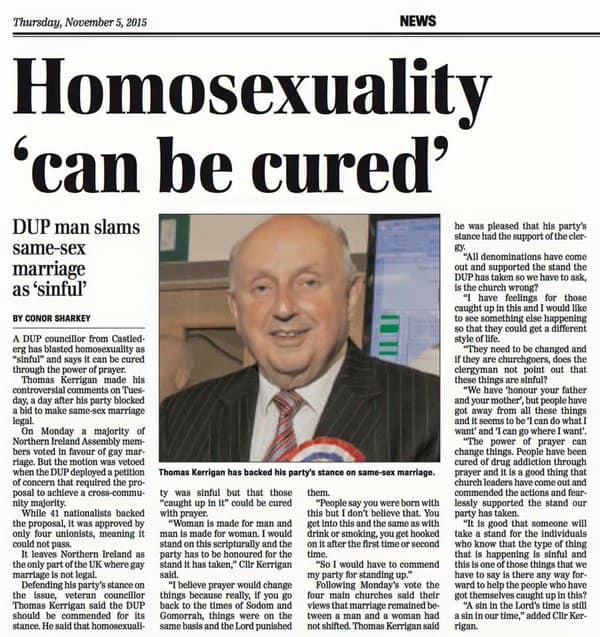 A Northern Ireland deputy mayor has been urged to stand down after he suggested gay people can be cured through prayer.

Democratic Unionist Party (DUP) member and Deputy Mayor of Derry and Strabane Thomas Kerrigan made the comments after his party again blocked legislation for same-sex marriage. A majority of Members of the Legislative Assembly voted in favor of the measure. However, a blocking mechanism allowed the DUP to put an end to the legislation.

Kerrigan said that young people who do not attend church are leaving themselves open to “being gay” and to drug and alcohol abuse. If “people relied more on prayer,” he added, “it could cure a lot of these problems”.

“This isn’t the first time a member of the DUP has made these kind of comments, so it would be useful if the party clarified if this is the party policy.

“He needs to withdraw his remarks and apologize for the offensive they have caused.”

A DUP spokesman said the party “does not have any [same-sex marriage] policy nor have we any plans to adopt such a policy in the future.”

Watch a BBC report on the campaign for same-sex marriage in Northern Ireland.