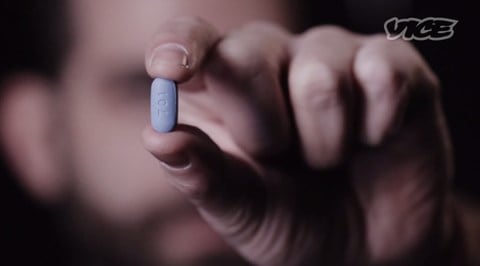 A new report from the Centers for Disease Control finds that approximately 1 in 4 gay men should be taking Truvada, also known as pre-exposure prophylaxis, or PrEP, on a daily basis to prevent HIV transmission. That equates to roughly 1.2 million Americans. Currently, the CDC estimates that only 21,000 people nationwide are taking PrEP.

When taken consistently, the one-a-day blue pill — also known as pre-exposure prophylaxis, or PrEP — reduces sexual transmission of HIV by roughly 92%, the agency said. In injectable drug users, it reduces the risk by more than 70%.

By looking at the sexual risk profiles for different groups in the U.S., the CDC determined that 1 in 4 gay and bisexual men, 1 in 5 injectable drug users, and 1 in 200 heterosexual adults should be counseled about PrEP.

About 1.2 million Americans are HIV positive, and new HIV infections in the U.S. hover at around 50,000 per year. Of those, only 30% are on the antiretroviral drugs that can suppress the level of virus in their blood to greatly decrease the likelihood of transmission.

Americans with very high risk for #HIV could benefit from PrEP, a daily pill that prevents HIV. https://t.co/THlsAXba0C #VitalSigns

Only approved by the FDA in 2012 as a means to prevent HIV transmission, PrEP has faced questions over its efficacy due to its relative youth. Yet the scientific evidence in support of PrEP now appears irrefutable:

Several independent studies have made it absolutely clear that PrEP works — and not just in clinical trials. In cities like San Francisco, Miami, and Washington D.C., it’s been shown that when given the drug in community healthcare settings, most people will be good about taking it properly, and thus face a near-zero chance of contracting the virus.

Apart from the waning debate about PrEP’s viability, other hurdles stand in the way of increasing the number of gay men on PrEP. There’s stigma surrounding its use, being associated with promiscuity by many and labeled a “party drug” by AHF president Michael Weinstein.

RELATED: ‘Why I Am A Truvada Whore’

Plus many healthcare providers are ignorant about the medication:

[A] recent study showed that 34% of primary care practitioners had not heard of PrEP. And among communities at the highest risk for HIV, stigma and discrimination are huge barriers to receiving preventative care.

In the U.S., for example, young black and Latino men are far less likely to be on PrEP than other groups, despite the fact that both populations are disproportionately affected by HIV. In 2010, the most recent year numbers were available, black Americans made up 44% of all new HIV infections, and Latinos 21%.

The CDC suggests that education about PrEP is key, pointing to New York Governor Cuomo’s campaign to End the Epidemic, which since being implemented has seen a more than 300% increase in the number of New Yorkers taking PrEP.