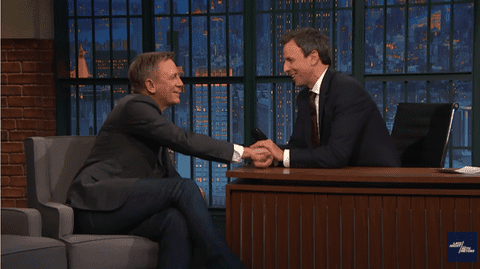 Daniel Craig was on Late Night with Seth Meyers last night talking about his new James Bond film Spectre, and Meyers had a word of warning for Craig about what to expect in his upcoming film roles. Meyers suggested that playing Mr. Bond may have skewed his impression about sex in movies.

The conversation then turned from Craig’s love scenes with ladies to the possibility of one with a man:

CRAIG: Do you think I’m going to find that difficult? […] What if I’m doing a movie about, I’m having a relationship with a guy? That might happen.

Meyers then turned on his Bond girl impression which left Craig a bit flummoxed.