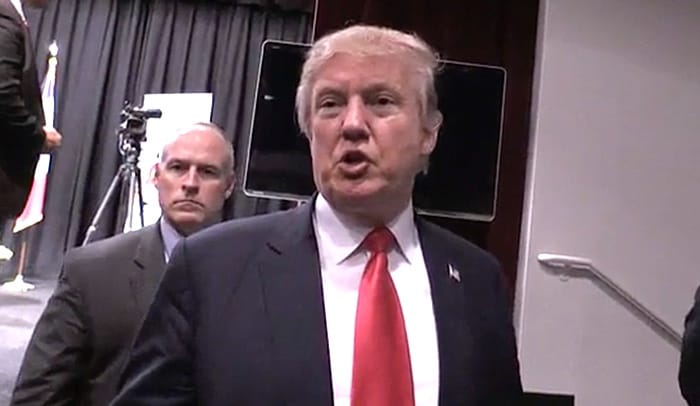 In remarks to NBC News on Thursday night, Republican frontrunner Donald Trump said he “absolutely” wants a database to track Muslims in the United States.

The reaction to Trump’s plan has been less than favorable.

Said Ibrahim Hooper, national spokesman for the Council on American-Islamic Relations: “We’re kind of at a loss for words. What else can you compare this to except to prewar Nazi Germany? There’s no other comparison, and [Trump] seems to think that’s perfectly OK.”

Added Rabbi Jack Moline, executive director of the nonprofit Interfaith Alliance: “My father was in World War II, and he fought to preserve America against what the Nazis were doing.”

“If there’s a rabid dog running around in your neighborhood, you’re probably not going to assume something good about that dog, and you’re probably going to put your children out of the way,” he said during remarks in Mobile, Alabama. “[It] doesn’t mean that you hate all dogs, by any stretch of the imagination, but you’re putting your intellect into motion and you’re thinking ‘How do I protect my children? At the same time, I love dogs and I’m gonna call the humane society and hopefully they can come take this dog away and create a safe environment once again.'”

“We have to have in place screening mechanisms that allow us to determine who the mad dogs are, quite frankly,” he added. “Who are the people that want to come in here and hurt us and want to destroy us? Until we know how to do that, just like it would be foolish to put your child out in the neighborhood knowing that that was going on.”