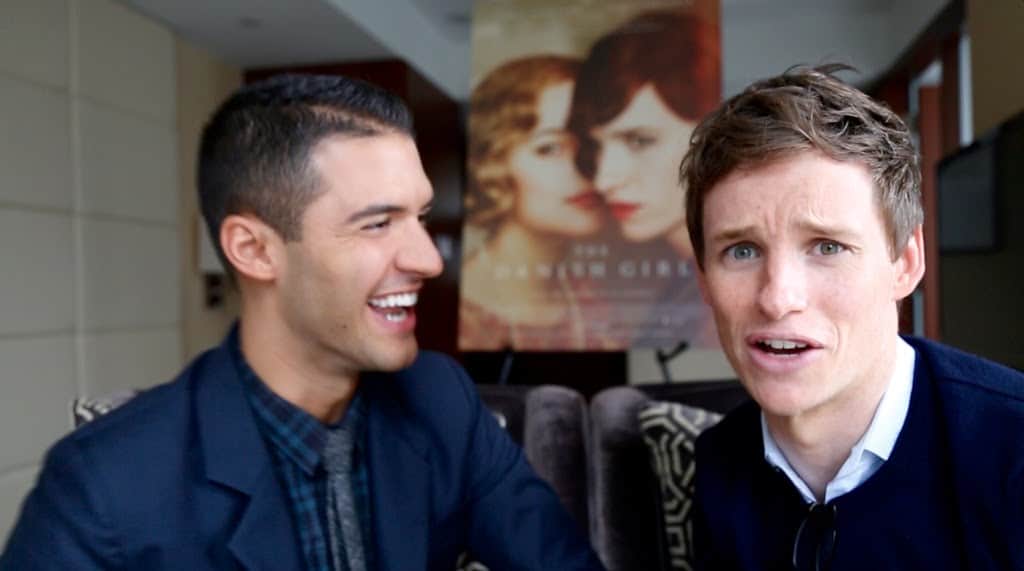 Redmayne’s video with Braun is, to our knowledge, the first time an Academy Award-winning actor has ever appeared in a ‘collab.’ It also marks the first video Redmayne has made for a YouTube channel.

Speaking with Braun about the impact he hopes The Danish Girl will have, Redmayne said he wants people to take away an understanding about the true meaning of love: “Love is about the soul. It’s not about sexuality. It’s not about gender. It’s not about, race, religion, it’s about something other.”

Redmayne said he also hopes The Danish Girl will bring a continued focus on issues facing the transgender community:

“I hope that this film continues the discussion…about being trans and what that is like. And continues to bring up the conversations that need to happen about discrimination, about abuse, about healthcare, all of those and I hope it continues that dialogue which is so sort of right for the moment because there’s still a long way to go.”

Asked what message he has for LGBTQ kids who feel they don’t fit in, Redmayne said,

“The notion of fitting in is so annoying! Don’t fit in; be yourself, be different…As human beings we all want to categorize things. Everyone keeps asking me in relation to this film about, sort of, what’s masculine and what’s feminine. The terms almost feel antiquated know. What do you say? Sport is for men and art is for women? It seems so sort of wrong. I would say, take Lily’s lead and have the courage to try. Because we’ve only got one shot at life. And I feel like one will always regret the need to alter yourself to comply or to fit in, just find your own self.”

Braun also talked with Redmayne’s co-star Alicia Vikander and director Tom Hooper in separate interviews. Like Redmayne’s video, those videos marks the first YouTube ‘collab’ for both Vikander and Hooper. Watch all three, below:

Previous Post: « Who Is Fancy, Meghan Trainor and Ariana Grande Lust After a Ripped Pool Boy in ‘Boys Like You’ Music Video – WATCH
Next Post: Troye Sivan Muses About Being Gay in New Betty Who Collaboration: WATCH »