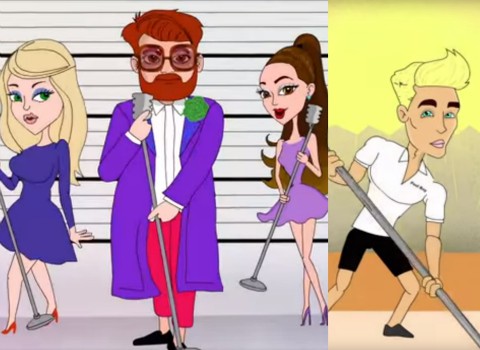 If you’re craving a little doo-wop to get your week started, you’ll want to check out the new music video for “Boys Like You” by newcomer Who Is Fancy featuring pop songstresses Meghan Trainor and Ariana Grande.

Tinged with that same Motown nostalgia found in the music of Charlie Puth and, of course, Meghan Trainor and Ariana Grande (circa Yours Truly at least), “Boys Like You” sees the trio singing about how a certain type of boy makes each of them break all their rules. Meanwhile, the music video for the song shows animated caricatures of each singer lusting after a ripped blond pool boy. Who Is Fancy’s caricature also seems, stylistically at least, to be meshing two 80s gay pop icons, Boy George and George Michael.

Who Is Fancy’s “Boys Like You” was also at the center of a recent controversy over gay dancing on ABC’s Dancing with the Stars. The network had said it would not allow a male couple to dance together to the song, which Fancy, Trainor and Grande will perform tonight.

RELATED: ABC Gives a ‘Definitive No’ to Gay Dancing on ‘Dancing With the Stars’ – VIDEO