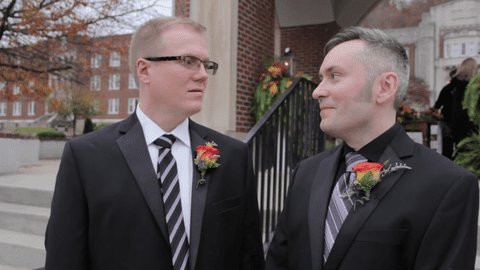 The gay couple who famously filmed Kim Davis denying them a marriage license with no legal authority to do so, making Davis a household name, has finally tied the knot.

David Ermold and David Moore went to the Rowan County Courthouse in July to seek a marriage license following the Supreme Court’s ruling striking down same-sex marriage bans nationwide. Though the ACLU had already filed suit against Davis, she was undeterred. She kept Ermold and Moore waiting, refusing to speak to them at first. Finally addressing them, she refused to issue them a marriage license and ultimately invoked “God’s authority” to flout the Supreme Court’s ruling.

Since that time, the video recorded by Ermold and Moore has been viewed over 1 million times and Davis has become a nation villain and symbol of the anti-gay right-wing.

Though it was over three months delayed and involved unforeseeable tribulation, Ermold and Moore have finally been able to get married. They tied the knot in a private ceremony on September 26 but decided to have a more public ceremony this past weekend at their Alma Mater, Morehead State. The end to the story was fitting, said Ermold: “Everything about [our struggle to get married] has been public so it kind of had to end that way.”

An overture of soft folk music welcomed the couple as they waltzed down the library steps toward the Bell Tower. Friends and family cried, smiled and snapped photographs to preserve the memory.

“These are people who deserve to have their love seen like everyone else,” said Taral Thompson, a Morehead State graduate.

Linda Carpenter, Moore and Ermold’s former landlord, said she was happy to see the couple wed. She said, “No, I’m not gay. And no I don’t understand it. But it’s not my business either.” Of the public battle over their desire to get married, Carpenter added,  “I watched them on television going through all that, and all I kept thinking was, why do these people hate them? They didn’t do anything wrong.”

Said Ermold of what he hopes people will take away from their battle with Davis, “If same-sex marriage is still an issue five years from now, I want people to be able to be open about who they are, and not be afraid of who they are and enjoy their life because this is the only life that we get.”

“This is our blessing from God,” he added.

Watch video of their wedding, below: