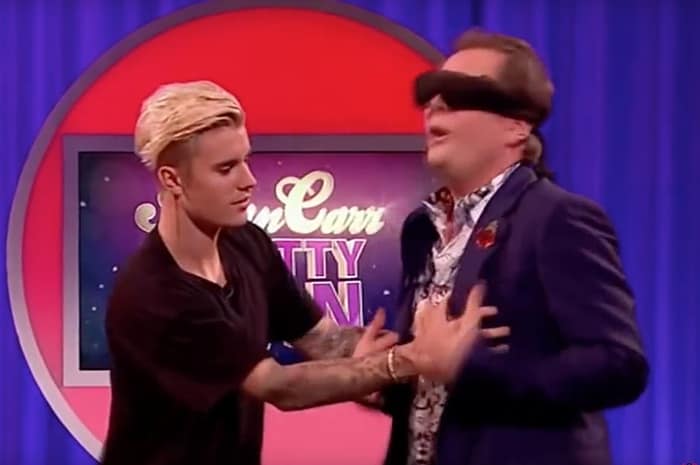 Justin Bieber and Alan Carr sat down for Carr’s UK talk show Chatty Man on Friday. Bieber dropped most of the attitude and was game for Carr’s brand of direct questioning, innuendo, and ridiculous stunts.

First Carr asked Bieber about his new album, noting that he announced it by getting a tattoo of the album’s title on his abs.

“You’re looking ripped at the moment,” says Carr. “I want to know how you got the cock trench? The V?”

RELATED: Pentatonix and Chvrches Cover Justin Bieber Hits ‘Where are Ü Now’ and ‘What Do You Mean’

Carr then questioned Bieber about crying at his VMAs performance: “Was it the emotions or the tightness of that harness, because I was in a harness last week…one of my testicles was here, and one was over here.” 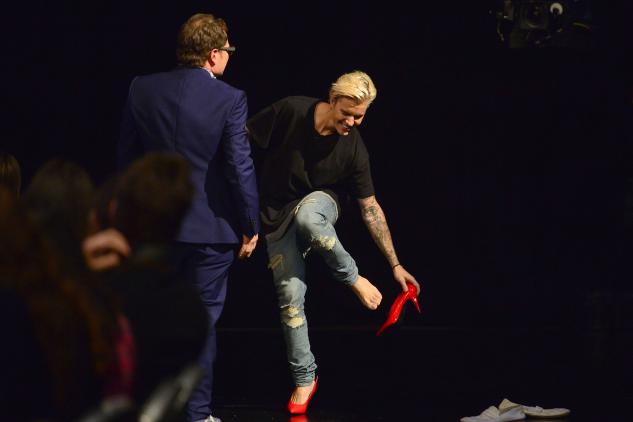 Finally, Carr then asked Bieber to blindfold him and throw Maltesers into his mouth, joking that they were having a 50 Shades of Grey moment before challenging Bieber to a race in red high heels.

Bieber said the interview was his new favorite:

Previous Post: « Mississippi Couples Challenge Gay Adoption Ban In Federal Court – VIDEO
Next Post: Another Seal Has Been Caught Taking a Ride on a Whale: WATCH »