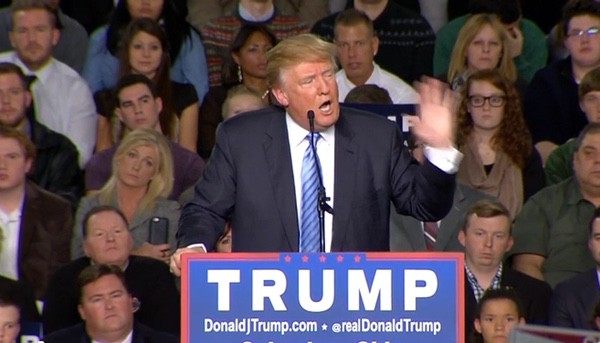 Donald Trump doubled down on his ‘unlikely things he saw on 9/11’ claims at a Columbus rally when he claimed he saw people jumping from the World Trade Center from his building in midtown Manhattan.

The Republican presidential contender lives in Trump Tower in midtown Manhattan, more than four miles away from where the World Trade Center towers once stood. Trump has lived in the 5th Avenue tower since before the attacks, according to media reports pre-dating 9/11.

The Trump campaign did not immediately respond to a request for comment asking how Trump witnessed people jumping out of the Twin Towers from more than four miles away.

Trump claimed recently that he saw thousands of Arabs celebrating in the streets of Jersey City, NJ when the towers went down.

Previous Post: « Who Is Fancy, Meghan Trainor and Ariana Grande Tease the Boys on DWTS: WATCH
Next Post: Adele Tries to Prove She’s a Better Liar Than Jimmy Fallon: WATCH »