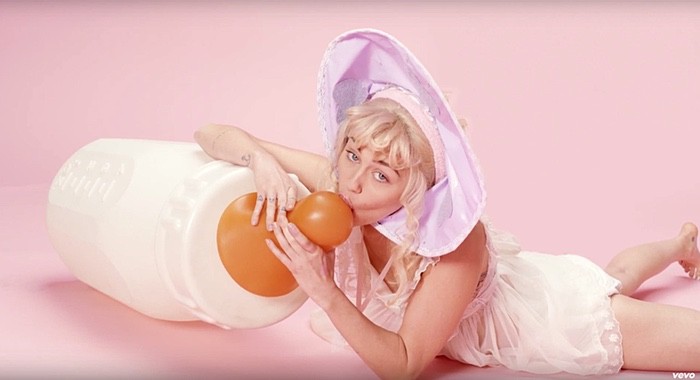 Miley Cyrus has reverted to wearing diapers and sucking on a pacifier in her latest video for “BB Talk”, a song about wanting a man to stop treating her like a child. It’s the latest single from the album she released at the end of August, Miley Cyrus & Her Dead Petz. The track was co-produced by The Flaming Lips and Oren Yoel.

Sings Miley in the chorus: “Alright so, I’m gonna be honest / It’s the super cutey shit, that’s the main issue here / I mean, I’m f–king what? / Look, I like when you send me, you know, the, the queen emoji, but when I send back the monkey, you know, the ones with the, the hands over the eyes, that means that sh-t’s just getting a little too weird for me…F–k me so you stop baby talking…”