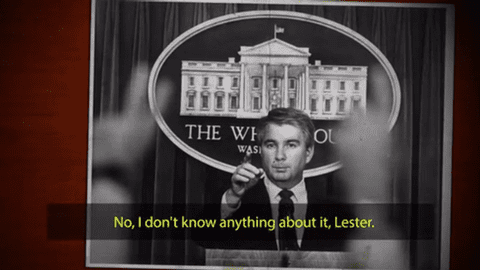 A new documentary short by filmmaker Scott Calonico provides an infuriating look at the official response from the Reagan White House during the beginning of the AIDS epidemic. A response that would condemn thousands to death.

When AIDS Was Funny examines never-before-heard audio tapes from three White House Press conferences, in 1982, 1983 and 1984 respectively, that reveal how the White House press pool and the White House Press Secretary Larry Speakes viewed the AIDS crisis as a laughing matter. Even more damning, the new audio tapes underscore President Reagan’s inaction on AIDS and Speakes’ refusal to talk to the president about the health crisis. Reagan notoriously didn’t mention AIDS in any of his public remarks until 1985. At that point over 5,000 people had died due to AIDS.

Using never-before-heard audio tapes from three separate press conferences, in 1982, 1983, and 1984, When AIDS Was Funny illustrates how the reporter Lester Kinsolving, a conservative (and not at all gay-friendly) fixture in the White House press corps, was consistently scoffed at when he posed urgent questions about the AIDS epidemic. With snickering, homophobic jokes and a disturbing air of uninterest, Speakes dismisses Kinsolving’s concerns about the escalating problem. “Lester was known as somewhat of a kook and a crank (many people still feel the same way),” says Calonico. “But, at the time, he was just a journalist asking questions only to be mocked by both the White House and his peers.”

To date, nearly 700,000 Americans have died of AIDS-related illnesses.

Watch the documentary short in full, below:

Watch this on The Scene.