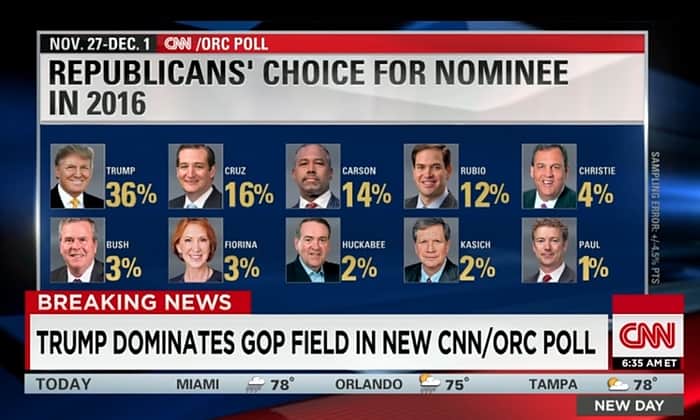 Donald Trump keeps surging and has hit 36 percent, his all-time high, in a new CNN/ORC poll.

Three candidates cluster behind Trump in the mid-teens, including Texas Sen. Ted Cruz at 16%, former neurosurgeon Ben Carson at 14% and Florida Sen. Marco Rubio at 12%. All other candidates have the support of less than 5% of GOP voters in the race for the Republican Party’s nomination for president.

Carson (down 8 points since October), former Florida Gov. Jeb Bush (down 5 points to 3%) and Kentucky Sen. Rand Paul (down 4 points to 1%) have lost the most ground since the last CNN/ORC poll, conducted in mid-October.

Cruz (up 12 points) and Trump (up 9 points) are the greatest beneficiaries of those declines. Rubio is also up slightly, gaining 4 points — an increase within the poll’s margin of sampling error — since the last CNN/ORC poll.