You are here: Home / Rachel Maddow Asks if it’s Accurate to Call Trump a ‘Fascist’, As Many Are: WATCH 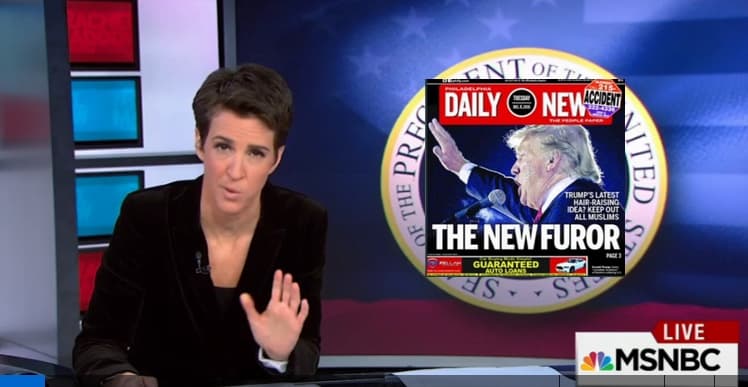 In her opening segment last night, Rachel Maddow looked at all the news pundits and politicians who are labeling Donald Trump a “fascist” in light of Trump’s call for a “total and complete shutdown” of Muslims entering the United States.

Maddow looks at the history of fascists, leading up to today in France, where Marine Le-Pen, the daughter of Jean-Marie LePen is pushing fascist ideas there.

In her second segment,  she is joined by Democratic presidential hopeful Senator Bernie Sanders, who speaks with her about the same topic.

“Let me give you my perspective on what’s going on,” Sanders says. “I think you have an enormous amount of fear and uncertainty in this country and it’s not just from San Bernardino or from Paris, but you’ve got millions of people who are in trouble today – they’re confused, they’re working longer hours for lower wages…they’re looking at a campaign finance system in politics and they’re seeing corruption…they’re in trouble, they need help..”

“And then you have demagogues like Trump come along. He says ‘I know what the case of your problems is.’ Remember what a few months ago the cause was? That Mexicans who were coming into this country – were theycriminals or rapists. Today, it is Muslims. You all remember how many years ago when we were younger, it was uppity women who were trying to take our jobs as men. It was those gay people who wanted to make everybody homosexual in our school system. It was blacks who wanted to take white jobs. That’s what demagoguery is about. It is to obfuscate the real problems in our society and find somebody you can blame and rally the American people.”