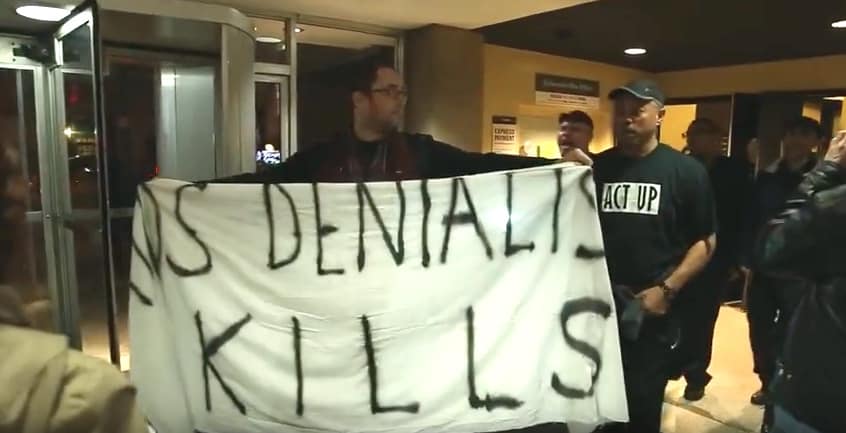 Writes ACT UP in a press release:

The chant “HIV Causes AIDS” was significant because one of the main tenets of AIDS denialism is that HIV is not the cause of AIDS. Other discredited claims of AIDS denialism are that HIV is not infectious and thus not transmitted via sex or needles, HIV antibody tests are meaningless, and anti-HIV medications are harmful and can even cause AIDS. The activists targeted Null for his history of promoting AIDS denialism on his radio shows. All AIDS denialist claims defy decades of scientific evidence established in hundreds of studies worldwide. Most importantly, these anti-science beliefs promote HIV infection through negligence.

The protest happened at a fundraiser for progressive radio station WBAI 99.5, the New York City outlet of the Pacifica Broadcasting Network. “WBAI hosts a number of progressive radio programs, but unfortunately, they also host a dangerous AIDS denialist like Gary Null, whose misinformation helps the spread of HIV,” said ACT UP member Brandon Cuicchi. ACT UP demands that Null stop promoting AIDS denialism on the Pacifica Network.

After activists were blocked from the auditorium, they chanted “New School, Shame on You” and moved outside to the sidewalk where they chanted and distributed flyers. There were no arrests.

ACT UP has also called for a boycott of Null’s vitamin sales business NutriPowders.com since he uses his radio show to promote taking vitamins instead of scientifically recommended medications. ACT UP member Jeton Ademaj said, “Nutrition is not enough to prevent AIDS when HIV is not controlled by real anti-retroviral medicine, the only treatment backed by real science. The only thing worse than Big Pharma profiteering from life-saving HIV medications are AIDS denialists profiteering from snake-oil that condemns HIV-positive people to avoidable illness and death.”

Watch video of the protest: