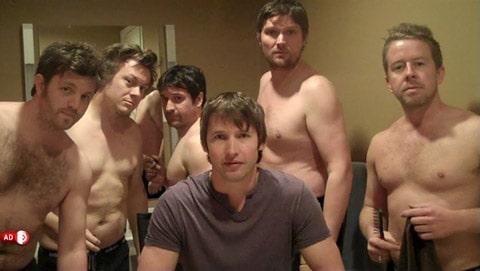 “I sing songs that aren’t very macho and so people will say, ‘oh you’re effeminate,’ or ‘gay’ as if calling me gay were an insult. But to call me ‘gay’ is a compliment and I would like to be considered an honorary gay man because I’m totally at ease with myself. And I suppose I’ve written songs that are sensitive because I wouldn’t normally describe those emotions in everyday life.”

Adds Blunt, who served under NATO in Kosovo as a member of the British army’s cavalry regiment:

“I also do see a relevance to what my previous job was. I was a reconnaissance officer. My job was going out there ahead of my commanders. To go and find the enemy and locate the enemy. Target the enemy. To do so I had to be incredibly sensitive to my surroundings…”

Ed Sheeran recently joked about being engaged to Blunt:

(top: a photo from his appearance on Ellen several years ago)