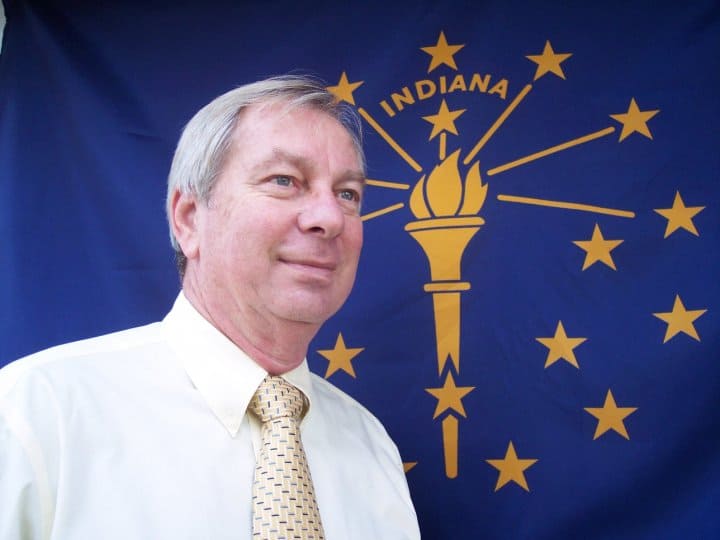 When are these Indiana bigots gonna learn?

Less than a year after an anti-LGBT religious freedom law caused untold damage to the the Hoosier State’s economy, one GOP lawmaker wants to prohibit trans people from using public restrooms according to their gender identity, with violators facing up to a year in jail and a $5,000 fine.

Indiana’s anti-trans bathroom bill — which is suspiciously similar to failed legislation from other states — comes courtesy of Sen. Jim Tomes, who naturally voted in favor of the infamous religious freedom law and against an emergency fix to mitigate the economic disaster it caused.

Tomes is a longtime former truck driver who heads the 2nd Amendment Patriots, a pro-gun group. He doesn’t believe in the separation of church and state, and he opposes same-sex marriage — because, “our little children.” Last year, Tomes delivered a bizarre speech in favor of a constitutional amendment that would have banned same-sex marriage, in which he invoked prayer in schools, marijuana legalization and Sunday alcohol sales.

Senate Bill 35 would make it a class-A misdemeanor for someone to knowingly enter a restroom designed for use by the opposite sex. The criminal penalty would not apply to people under 18, but schools would be required to designate all restrooms as either male or female, and prohibit students from using restrooms according to their gender identity.

Under the bill, a person’s status as male or female would be determined by the sex they were assigned at birth or their chromosomes, meaning police and business owners would presumably have to administer — and pay for — genetic testing on those suspected of using the “wrong” restroom. That’s not to mention the cost for the state to defend against lawsuits from those who are falsely arrested under the law — and from trans students and adults who accurately allege that it violates their federal civil rights.

“We’ve walked through a doorway we’ll never go back through, and we’re going to have to address some concerns that are now facing us,” Tomes said, according to the Associated Press. “If you were born a man, then you are obliged to use the males’ restroom.”

Tomes added that he’s “not trying to single out anybody or destroy anybody,” but Lambda Legal’s Camilla Taylor called that “the most disingenuous statement I’ve ever heard.”

The statewide LGBT group Freedom Indiana said in a statement:

“We’ve become aware of harmful legislation that’s been filed at the Statehouse that would target and punish transgender Hoosiers for being who they are. This legislation, which would put Indiana law in conflict with federal law, is specifically aimed at transgender youth, who already are very vulnerable to bullying and depression.

“The Indiana General Assembly is no place for scare tactics. We know there will be attempts in the upcoming session to promote fear over reality, but we also know that a majority of Hoosiers want to see gay and transgender people protected under our civil rights law, and we won’t let anything distract us from that goal. We hope lawmakers will stay similarly focused on making our state safe and welcoming for all people.”

Tomes’ bill provides exemptions for janitors, medical personnel and parents accompanying children under 8, which raises an interesting question. In places like Houston, anti-LGBT bigots have falsely asserted that allowing trans people to use restrooms according to their gender identity will lead to sexual predators dressing up as women and preying on little girls. But what about the threat of sexual predators dressing up as janitors or paramedics?

Anyhow, if you’d like to drop Tomes a line and thank him for this “Christmas gift” to the trans community, you can email him or find him on Facebook (at least until someone on his staff figures out how to change the settings).

Previous Post: « Steve Grand Takes You Behind-the-Scenes of His Christmas Video Shoot: WATCH
Next Post: The ‘Deadpool’ Trailer is Here with Destruction, Disfigurement, and a Lot of Humor: WATCH »