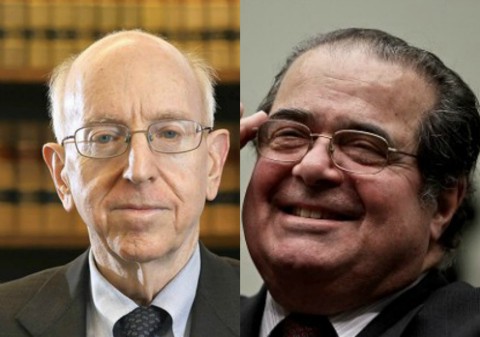 Judge Richard Posner, of the 7th Circuit Court of Appeals, rose to the rank of demigod in many gay circles after his evisceration of arguments in favor of same-sex marriage bans in August of last year. A Reagan appointee, Posner has a reputation for being something of a wild card, and no one could have predicted how brilliantly he would slay the anti-gay bigots that stepped into his court over a year ago.

Now, in an op-ed published yesterday in The New York Times, Posner, along with law professor Eric Segal, is getting back into the conversation about gay marriage, taking a fellow Reagan appointee to task for his batsh*t crazy views on the subject.

The jurist we’re talking about is, of course, Supreme Court Justice Antonin Scalia. Posner and Segal underscore just how obsessed Scalia has become with gay marriage and how his defeat in Obergefell has spurred him towards a “political ideal” that “verges on majoritarian theocracy.”

He has vented even more than his usual anger over this decision. It has become apparent that his colleagues’ gay rights decisions have driven him to an extreme position concerning the role of the Supreme Court. […]

Obergefell seems to obsess him. In a speech at Rhodes College in Memphis, he said that the decision represents the “furthest imaginable extension of the Supreme Court doing whatever it wants,” and that “saying that the Constitution requires that practice” — same-sex marriage — “which is contrary to the religious beliefs of many of our citizens, I don’t know how you can get more extreme than that.” The decision, he said, “had nothing to do with the law.”

The suggestion that the Constitution cannot override the religious beliefs of many American citizens is radical. It would imply, contrary to the provision that forbids religious tests for public office, that religious majorities are special wards of the Constitution. Justice Scalia seems to want to turn the Constitution upside down when it comes to government and religion; his political ideal verges on majoritarian theocracy. […]

The implication is that if a majority of Americans reject same-sex marriage on religious grounds, the Supreme Court must bow.

In the op-ed, Posner and Segal also make mention of Scalia’s recent comments comparing homosexuals to child molesters because both are sexual minorities. Scalia called child molesters a “deserving minority”, adding that “nobody loves them.”

In essence, Posner did the edified, non-Ryan Murphy version of what Jamie Lee Curtis does to Antonin Scalia here.

“The homosexual lifestyle is not destructive to the fabric of American society.”