You are here: Home / Madonna ‘Sings for Peace’ in Impromptu Performance at Place de la Republique in Paris: WATCH

On Wednesday night, Madonna gave an impromptu performance for peace to people gathered in the Place de la Republique in Paris.

The Place de la Republique has become an unofficial monument to the victims of the Paris Terror attacks on November 13. In the ensuing weeks, crowds have continued to gather, light candles, leave flowers, pray and remember those who died. 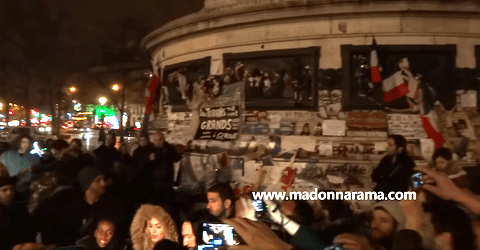 Madonna’s appearance at the Place came after a performance at Paris’ AccorHotel Arena. She posted a photo of her and her son David Banda on their way to the square, inviting fans to meet her there as she sings “some songs.”

Madonna went on to perform at least three songs, “Ghosttown” (off of her Rebel Heart album),  John Lennon’s “Imagine”, and her iconic tune, “Like a Prayer.”

Earlier in the night, son David performed Bob Marley’s “Redemption Song” with the iconic Paris “peace” image in the background.

Watch Madonna’s performance as well as video of her leaving Place de la Republique, below: