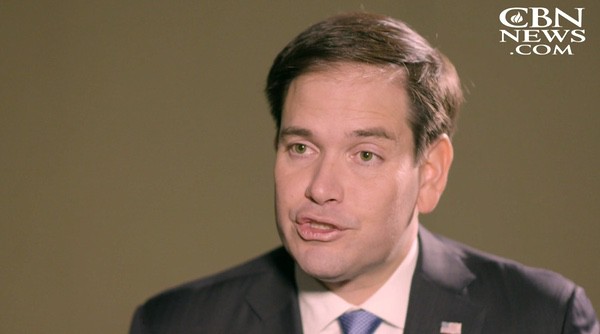 GOP presidential hopeful Marco Rubio sat down with David Brody at the Christian Broadcasting Network in an interview published Saturday and told Brody that as president he would reverse Obama’s LGBT executive orders that stop religious business owners from discriminating against gays, appoint conservative SCOTUS justices who don’t believe that gays have the right to marry or that women have rights over their own bodies. He also said any transgender rights laws regarding bathroom usage have got to go.

Watch and read the full transcript below:

David Brody: What could a President Rubio do in a situation like that? A lot of folks have talked about maybe religious liberty, the religious freedom act. Mike Huckabee and others have said some things like that.

Marco Rubio: There’s no doubt that we need to be extra vigilant now about protecting the religious liberties of Americans and that includes having a justice department that’s vigilant about ensuring that those who hold traditional values are not being discriminated against. That includes reversing any administrative decisions made by this President that force religious, or religious motivated entities. You may not be owned by a church, but you are a religious school, or your mission is to spread the Gospel and adhere to God’s teachings ensure that people in the private sector and the not-for-profit sector are being protected in living out their faith.

And beyond it, I think one of the biggest things the next President is going to do is appoint justices to the Supreme Court — justices who understand that the Constitution is a living and breathing document. It is a document of limitation and it’s supposed to be interpreted and applied based on its original intent. And there is no way that you can read that Constitution and deduce from it that there is constitutional right to an abortion, or a constitutional right to marry someone of the same sex. And what you have is a Supreme Court that wanted to reach a certain policy outcome and so creatively manipulated the Constitution to discover a right that for over two centuries, some of the most brilliant minds and legal history didn’t find. So you need judges that understand how constitutionally flawed that those two kinds of rulings and others have been and that’s what the most important thing the next President will do is appoint Supreme court Justices that actually will apply the constitution irrespective of their personal feelings about the issue.

David Brody: As well as potential executive orders and possibly a strong attorney general in that role.

Marco Rubio: Well, the executive orders would be to reverse the executive orders the President has made on things like gender equality in restrooms. You’ve seen some local districts and others been forced to, you know, provide girls access to a boys’ bathroom and so forth. These sorts of things you’ve seen in Illinois for example, but also ensure that we’re not doing anything that at any part in our government that is putting organizations that are motivated by their faith or organized around their faith from having to violate the tenants of their faith and that includes government contractors. There are many government contractors and small companies who provide services to the government who are faith-based people, and they are, they are being compelled to sin by government in their business conduct. That is not something we should be supporting.