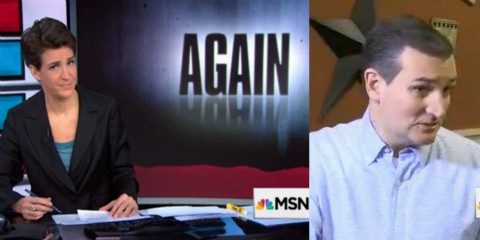 As we reported yesterday, Senator Cruz had this to say about the attack:

“The media promptly wants to blame him on the pro-life movement when at this point there’s very little evidence to indicate that.”

Asked about a report that the shooter had shouted “No more baby parts” when being taken into police custody, Cruz responded,

“It’s also been reported that he was registered as an independent and a woman and a transgendered leftist activist. If that’s what he is, I don’t think it’s fair to blame on the rhetoric on the left. This is a murderer.”

While Maddow notes that many other Republican presidential candidates have responses to the attack worth dissecting, Cruz’s is notable because of his own politics on abortion and his ‘strange’ assertion that a ‘transgendered leftist’ is to blame for the violent attacks. Said Maddow,

I want to talk specifically about Senator Cruz though. because Senator Cruz is linked to this issue in one very specific way of his own making. Because Senator Cruz as a presidential candidate has gone out of his way just in the past couple of weeks to court, and celebrate and brag about his own affiliation with people who are at the very radical, bleeding edge of abortion extremism and violence […]

Senator Ted Cruz is in a bad position as a political leader here because of the way he has touted endorsements from people on the violent end of anti-abortion extremism who have said publicly and repeatedly that abortion doctors ought to be killed. To get away from that now, he has now seized on what appears to be an inaccurate voter registration record to claim that the shooter at this planned parenthood that killed three people and injured nine people must have been in his words, quote, a transgendered, leftist activist. Okay.

Watch Maddow tackle Cruz’s assertion about the attacks and interview the head of Planned Parenthood, below: