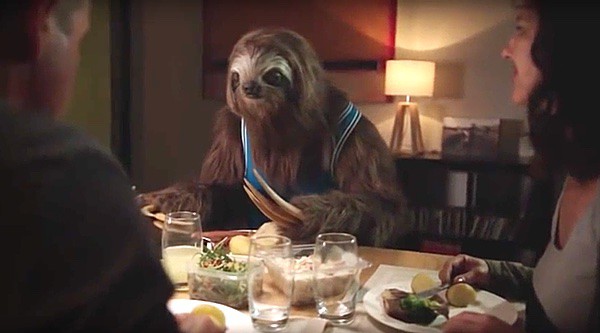 A new anti-marijuana ‘Stoner Sloth’ campaign from Australia’s NSW government is going viral because it’s absurd and amusing. The government body created the ad, which features a sloth standing-in for a teen stoner in everyday situations.

The sloth is actually lovable in a non-verbal, Wookie-like, groaning kind of way and the internet, instead of seeing the government’s message, is taking the sloth’s side and mocking how ridiculous the ads are. Many are saying that they actually have the effect of encouraging kids to smoke up.

Read a few Twitter reactions, and watch the ad below.

Seeing as #stonersloth is actually far more active than a regular sloth, a lot more, should I assume that smoking increases productivity?

Imagine sitting in a marketing meeting and all agreeing that #stonersloth is a good idea.

Inspired by #stonersloth, I have devised Heroin Heron to pitch to NSW Health. The only problem is finding a vein in those thin heron legs

I want to buy a #StonerSloth action figure

I hope #stonersloth gets a movie.

The lesson I'm learning is that I want to hang with #stonersloth. Thanks Government for helping me find new friends.

The Stoner Sloth campaign also  has its own website.

The NSW Department of Premier and Cabinet and NSW Health launched the campaign which a spokesperson said was created by an external advertising agency and “informed by research conducted by the National Cannabis Prevention and Information Centre. “It was designed to be shareable among young people who are some of the most vulnerable to cannabis use and to encourage them to stop using before they become dependent,” the spokesperson said.

“They have used our name to cover this campaign …We are going to ask them to print a retraction that it is based on work that we did,” said centre director Jan Copeland.