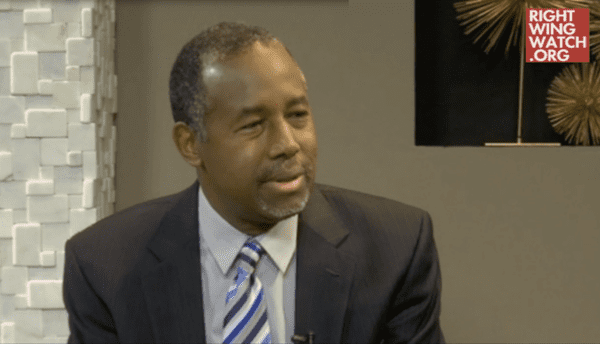 Ben Carson says that gay rights activists are opposed to free speech and are out to ‘ruin the lives’ of those who, as he put it, support the credo of “live and let live.”

“The way it works now is they target you and they have all kind of hate speech ridicule, if there’s a way they can bring action against you they will do that, try to ruin your life. Look at all the people who because of their religious convictions and their belief in what the Bible says have lost their livelihood and they’re put in jeopardy over the gay marriage issue, when in fact this is supposed to be a country where you live and let live. I personally don’t have any problem with any two people, regardless of what their feelings are, of living together, of getting a lawyer to create some documents so they can share property and have hospital visitation rights, but to change the definition of marriage, the problem is once you do that for one group, why wouldn’t you have to do that for the next group?”

Carson also said, “Everybody gets equal rights, but nobody gets extra rights, extra rights to change everything for everybody else to suit them.”

Previous Post: « Gay Indie Film ‘Fair Haven’ Looks at Surviving Ex-Gay Therapy and Finding Love – TRAILER
Next Post: Have You Ever Wondered What You Would Say To Your Closeted Self? – WATCH »