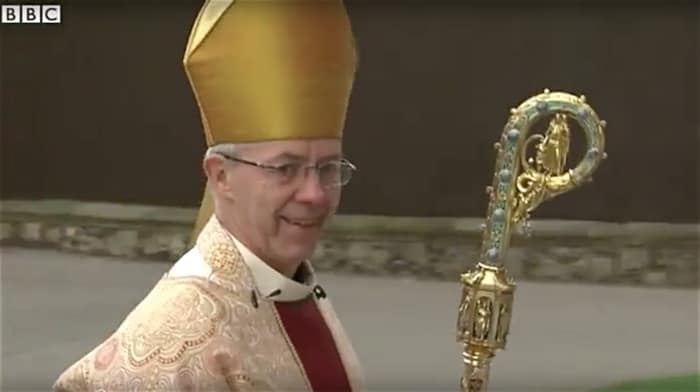 Earlier this month we reported on the Anglican Church’s decision to suspend the U.S. Episcopal Church for three years from any committees or decision-making within the church over its acceptance of gay marriage and gay relationships.

The decision was made at a meeting in Canterbury, UK, which exposed a major schism in the church. A British MP even announced he was leaving the church over the “profoundly evil” direction it has taken toward gay people.

…The most vocal protests to the Episcopal embrace of gay rights came from Africa, home to some of the fastest-growing churches in the Anglican communion and the deepest opposition to gay relationships as a violation of Scripture. Many African countries have criminalized gay relationships.

The U.S. Episcopal Church has since announced it is not backing down in its support of gay people and their relationships.

And a new poll among Church of England followers shows that most are on the side of the Episcopalians.

A poll conducted in the aftermath of the Canterbury meeting found 45% of people who define themselves as Church of England approve of same-sex marriage, compared with 37% who believe it is wrong. A similar survey three years ago found almost the reverse: 38% of Anglicans in favour and 47% opposed.

The lowest levels of support for same-sex marriage – 24% – were found among Anglican men over the age of 55, a group that dominates the church leadership. Jayne Ozanne, a leading gay activist within the C of E, who commissioned the poll from YouGov, said this finding was “deeply worrying”. “Unfortunately, this is exactly the profile of those in the senior positions of power and influence within the church,” she said.

The poll’s findings, released to the Guardian, are likely to amplify calls within the church for a change in its stance. Gay and lesbian activists say the church’s insistence on a traditional interpretation of scriptures alienates and excludes LGBT Christians, and further marginalises the church in wider society.

Said Jayne Ozanne, a leading gay activist within the Church of England, who commissioned the poll from YouGov:

“These figures confirm what many of us have known for some time: that the Church of England leadership is seriously out of step with its members, and even more so with society at large. Far more Anglicans now believe that same-sex marriage is right than those who think it is wrong. It is therefore vital that we recognise the challenge that this represents to us as a church, particularly given that as the established church we are called to minister and serve the whole nation. The church now faces a major challenge to explain clearly to the nation just why it discriminates against people like me and others in the way that it does. With such a large proportion of society now in favour, the church has some serious explaining to do – especially to the younger generation who find themselves repelled by a church which does not share their views.””

Previous Post: « You Can Help Turn the Harlem Hate Church into a Shelter for LGBT Youth: Here’s How
Next Post: India Supreme Court to Reconsider Decriminalization of Gay Sex »