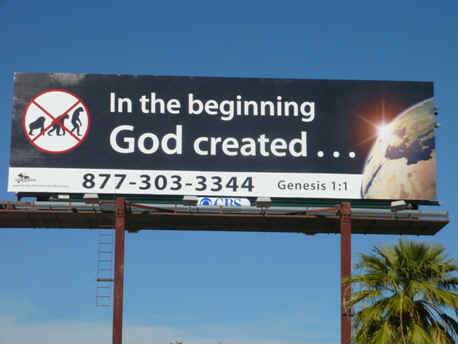 An anti-gay Christian ministry has erected a billboard at one of the entrances to San Diego’s heavily LGBT Hillcrest neighborhood.

The billboard from Christian Aid Ministries is similar to the one above that reads, “In the beginning God created …,” alongside a crossed-out image associated with the theory of evolution, SDGLN.com reports.

The billboard includes a phone number for CAM and a citation to Genesis 1:1, which states, “In the beginning God created the Heavens and the Earth.” However, there’s plenty of reason to believe the billboard may also be subtly referencing God’s creation of Adam and Eve, which anti-gay bigots frequently invoke by pointing out that He didn’t create “Adam and Steve.”

CAM says its Billboard Evangelism program is designed “to point the American people to Christ by posting Gospel messages along major highways and interstates, where people have the most time to think.”

A 2012 article about the program on CAM’s website begins: “AMERICA IS UNDER ATTACK! Spiritually. More and more Americans ridicule God, the Bible, and Christian values. Gay marriage, fornication, adultery, and pornography are freely accepted. Blasphemy is a part of everyday speech, and our country has legalized the slaughter of millions in the womb.”

A “statement of faith” on the website of the Billboard Evangelism program, GospelBillboards.org, reads in part: “We believe that marriage is designed by God to be the union of one man and one woman for life. Therefore, any sexual relationship outside this marriage is adultery. Furthermore, adultery, fornication, homosexuality, lesbianism, and any other sexual involvement is condemned by God.”