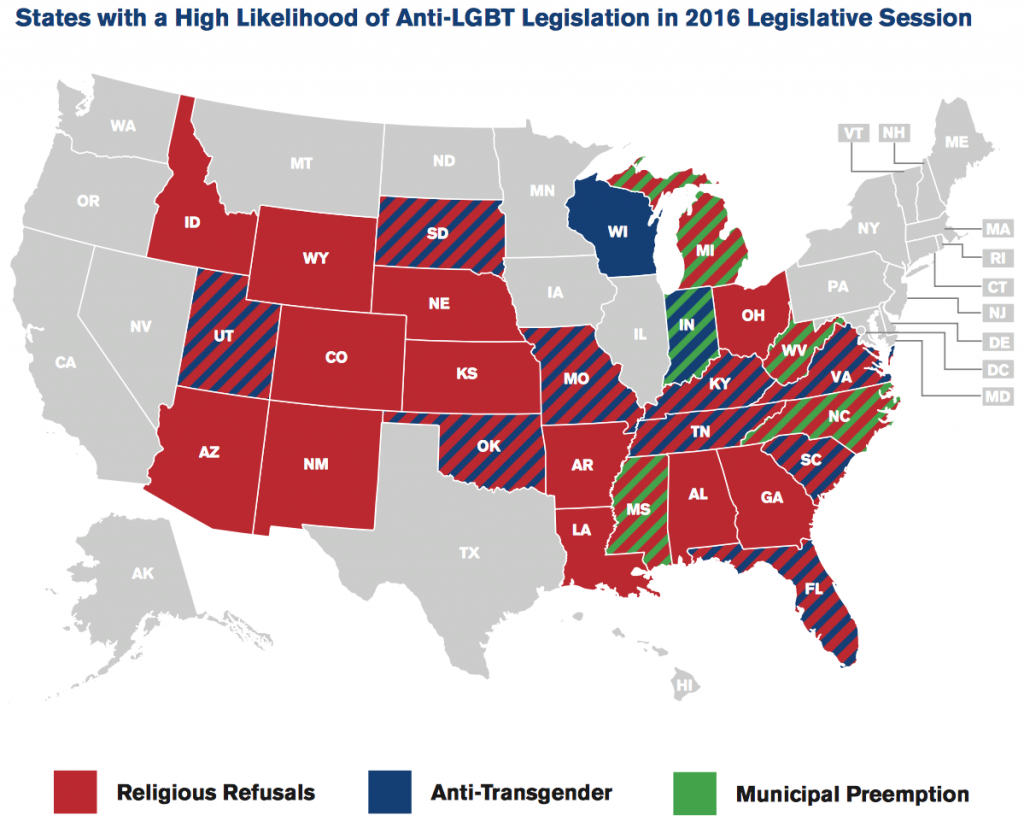 At least 27 states are likely to see anti-LGBT legislation in 2016, according to a rather gloomy forecast released Friday by the Human Rights Campaign.

Last year, 151 anti-LGBT bills were filed in 33 states, but very few passed — most notably a “religious freedom” bill in Indiana and a ban on local nondiscrimination ordinances in Arkansas.

However, HRC said many of the bills that were left pending in 2015 will carry over into this year’s state legislative sessions, and new anti-LGBT bills have already been introduced in several states, including Indiana, Missouri, South Carolina and Tennessee.

“2016 will prove a critical year for the fight for LGBT equality in states across the country,” HRC President Chad Griffin said in a statement. “The progress our movement has made is threatened by an organized effort to pass discriminatory legislation that seeks to rollback our hard-won rights. We will have much work to do to defend our rights this year, but we will not waiver in our fight to expand the map for LGBT equality to every corner of this country.”

Legislatures in 46 states and the District of Columbia are scheduled to convene during the first four months of 2016. The Texas Legislature, where more than 20 anti-LGBT bills were filed in 2015, doesn’t meet again until 2017. Montana, Nevada and North Dakota also don’t have state legislative sessions this year.

On the bright side, campaigns to pass LGBT-inclusive nondiscrimination laws are expected in at least eight states — Arizona, Florida, Idaho, Indiana, Michigan, Nebraska, Ohio and Pennsylvania. Meanwhile, states with pro-equality legislative majorities are expected to consider anti-bullying laws, bans on so-called “conversion therapy,” measures that would simplify name and gender marker changes on identity documents, and bills that would require LGBT cultural competency training for medical and social service providers.