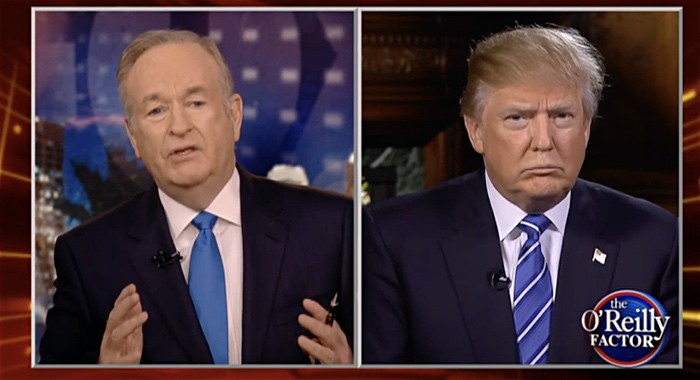 Donald Trump showed up on The O’Reilly Factor last night where O’Reilly did everything he could to convince the stubborn blowhard that he’s making a bad move by avoiding Thursday night’s debate.

Said Trump right off the bat:

“I have zero respect for Megyn Kelly. I don’t think she’s good at what she does and I think she’s highly overrated. And frankly, she’s a moderator; I thought her question last time was ridiculous….Everybody said I won all six debates. Especially the last one.”

O’Reilly pleaded with Trump, perhaps on behalf of the FOX News network:

“I believe personally that you want to improve the country. By doing this, you lose and opportunity to convince others who may put you into the White House … that is true. You have in this debate format the upper hand — you have sixty seconds right off the top to tell any of the moderators, ‘You’re a pinhead, your question is unfair, and here’s why, and here’s what I want to say’. By walking away from it, you lose the opportunity to persuade people you are a strong leader.”

Replied Trump, who is holding a rally for veterans to compete with the debate:

“I understand your opinion Bill but tomorrow night at 9 o’clock at Drake University we’re going to have a tremendous event and I’ll have much more than 60 seconds frankly.”

Do you think Trump’s avoiding the debate is going to hurt or help his campaign?
Watch: