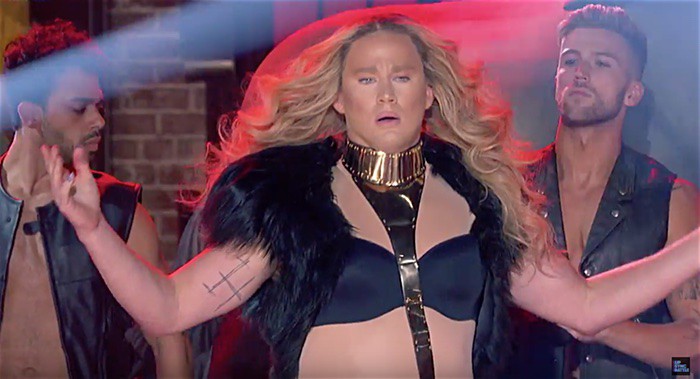 Spike’s Lip Sync Battle saw some fierce drag last night, as Jenna Dewan Tatum faced off against her husband in two numbers. Entering the stage on a horse, Channing Tatum brought Beyonce’s “Run the World (Girls)” as a response to his wife’s Magic Mike-themed number of Ginuwine’s “Pony”.

Watch the real Beyoncé’s arrival at 3:30.

This spectacle followed a number in which Channing became Elsa from Disney’s “Frozen” and twirled a version of “Let It Go”.

Previous Post: « Obama Gets Heated with Anderson Cooper Over ‘Conspiracy’ Notion on Guns: WATCH
Next Post: Snowy Owl is the Most Gorgeous Thing to Happen on Traffic Cam, Ever: WATCH »