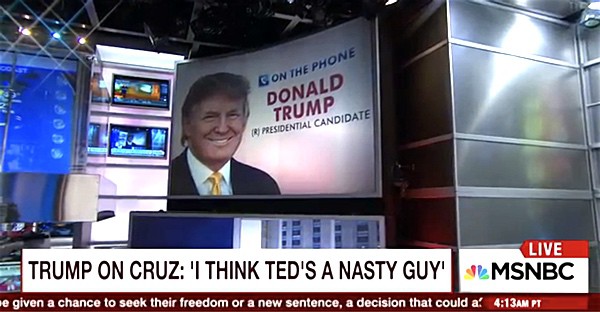 Donald Trump called in to Morning Joe this morning and unleashed on his GOP rival Ted Cruz:

“I think Ted’s a nasty guy. People don’t like him at all. All of these Republican senators, he doesn’t have the support of one of them. He’s a wacko like this Glenn Beck – every time I see him he’s crying, emotional, what a mess – and he gets a wackjob like Glenn Beck to support him. I think Ted’s got a problem. He doesn’t tell the truth…Ted Cruz lies, he is a liar…That’s why nobody likes him. That’s why the Senate people won’t endorse him…He looks like a jerk, he’s standing all by himself. And you know, there’s something to say about having a little bit of ability to get other people to do things. You can’t be a lone wolf and stand there. That’s sort of what we have right now as a president.”

When asked if he was comparing Cruz to Obama, Trump replied:

“Well, they’re the same. I think actually, Ted is more strident than Obama, if you want to know the truth. Nobody gets along with Ted. At least some people like Obama. Nobody likes Ted. I don’t find anybody that likes him. I talk to senators that frankly want to come out and endorse me, it’s amazing what’s happened over the last two weeks…Over the last two weeks, so many people are calling and saying, ‘We want to get involved with you, we want to endorse you.’ We have a very powerful endorsement coming down today…We have a powerful endorsement coming down today. So many people want to endorse us because they say Ted Cruz is wacky. There’s something missing there. Something wrong.”

When asked who the endorser is, Trump said “you’ll find out a little bit later.”