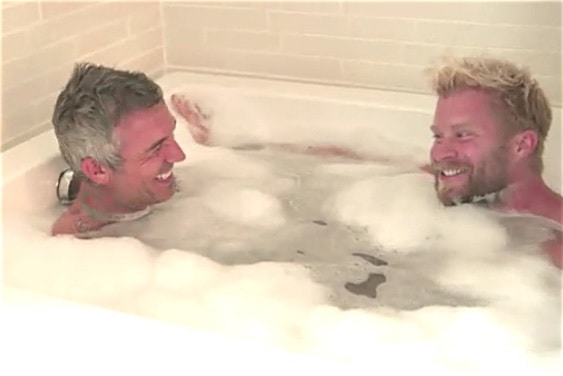 Once again, Bravo’s Newlyweds: The First Year features a gay couple (season 1 featured a gay male couple, Season 2 a lesbian couple) but this year one of the husbands is an ex-Mormon from Utah. Brandon Liberati and Craig Ramsay now live in California.

“Everyone knows that being gay in Utah is still quite a struggle, even though marriage is legal now. We really give people outside of Utah a look at the struggle that the gay community goes through inside the state. One of the main reasons we did this was for marriage equality. To actually show people who had fear about the [Supreme Court] decision [legalizing gay marriage] that we’re actually no different than any other married couple….We have to create our families. And it’s done in such a loving way. Hopefully, it’s going to resonate — especially with people in Salt Lake City — that we have really strong family values.”

Watch a trailer for the new season:

Previous Post: « Catch Up with Ian and Mickey on the FULL Premiere Episode of ‘Shameless’ Season 6: WATCH
Next Post: Houston’s Annise Parker Officially Leaves Office After 6 Years As 1st Out Gay Mayor of Major US City »